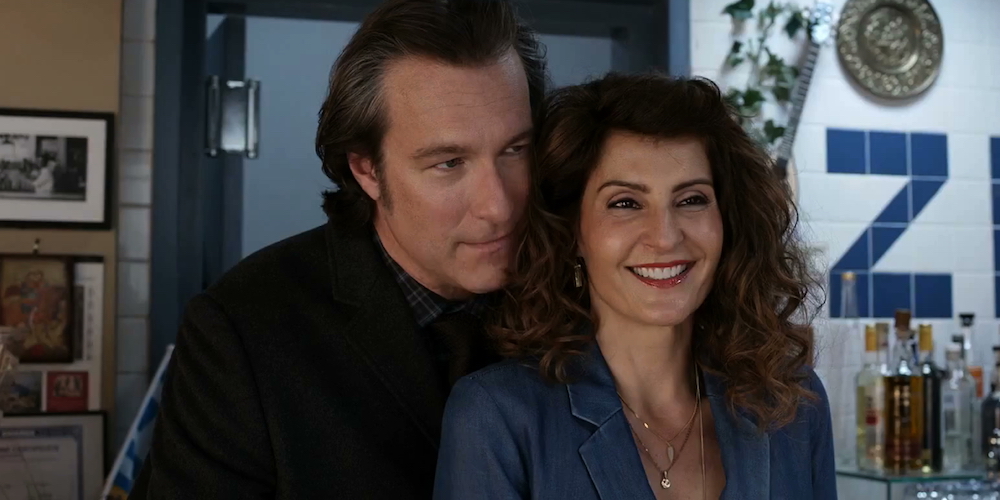 Might be time again to grab some stock in Windex, because now it turns out that elixir of wonders could be just the thing for a bum hip.

The Windex thing was just a part of the charm that drove My Big Fat Greek Wedding to insane box office in 2002. But beneath the idiosyncrasies, it connected through a sweetly natural sense of family, and easy humor delivered by people that looked and felt real, not just a Hollywood-approved facsimile.

MBFGW2 brings back those familiar characters, but this time the authenticity is lacking.

The gang is still in Chicago and as we catch up, Toula (Nia Vardalos,) is back helping at the family restaurant while her “Anglo” husband Ian (John Corbett) has become a high school principal. Their 17 year-old daughter Paris (Elena Kampouris) is shopping for colleges, and though Toula wants her baby close to home at Northwestern, Paris is thinking it’s time to get some distance from her smothering Greek family.

Meanwhile, Toula’s father Gus (Michael Constantine) is obsessed with tracing his ancestry back to Alexander the Great, and his search leads to a startling revelation: Gus and his wife Maria (Lainie Kazan), together for 50 years, were never legally married!

What’s the Greek word for “contrived”?

True, another big Greek wedding is kind of a requirement here, but the sitcom-ready setup underscores all that ails part 2. Vardalos’s original script seemed to come straight from her heart, but this time her writing manages very little that isn’t obvious and calculated. Director Kirk Jones (Nanny McPhee, Everybody’s Fine) adds plenty of over-exaggerated reaction shots, and not much else.

Genuinely funny lines are hard to come by, while the attempts to address real family issues such as empty nests, sexual preference and stale marriages are given only the broadest strokes, reduced to a line or two of conflict followed by hurried resolution. The level of frenetic family antics is desperately upped, and Ian’s ever -present laid back attitude grows suspect.

I mean, c’mon, this guy would’ve snapped by now.

The food looks delicious, though.