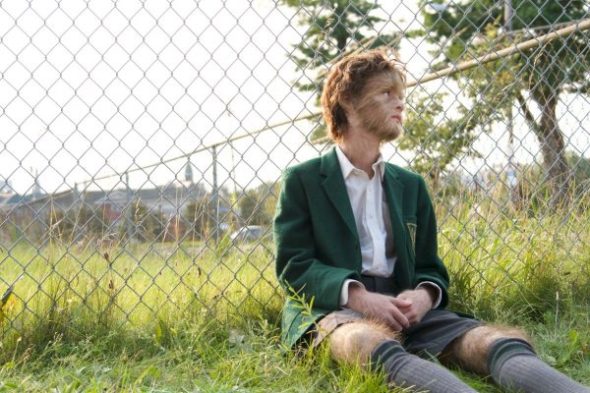 The True Adventures of Wolfboy

by George Wolf (no relation)

Have many Young Adult films carry a theme of self-acceptance? Plenty, but that’s not a problem.

It’s delivering that message via the same tired playbook that gets old, which is just one of the reasons The True Adventures of Wolfboy lands as a charming and completely captivating tale of a truly special teen.

And director Martin Krejci makes sure it feels like a tale in so many magical ways, starting with the beautifully ornate title cards separating each chapter in the journey of a lonely and self-loathing boy on his thirteenth birthday.

Paul (Jaeden Martell) suffers from hypertrichosis – an extremely rare affliction causing abnormal hair growth all over his face and body. He covers his face with a ski mask most of the time, but his father (Chris Messina) gently urges him to put the mask aside and accept the taunts of “dogboy!” with dignity.

Paul’s mother has been gone since he was born, but when a strange birthday gift delivers a map and a promise of explanations, Paul runs away to answer the invitation and get some answers from Mom (Chloe Sevigny).

Krejci crafts Paul’s journey from dog to wolf as an epic odyssey of self-discovery. From Pinnochio-like exploitation in a sideshow run by Mr. Silk (John Turturro, also a producer), to joining the eyepatch-wearing Rose (Eve Hewson) for a string of petty holdups, Paul’s world – and his world view – expands quickly.

But it is the effervescent teen Aristiana (transgender actress Sophie Giannamore) that most triggers Paul’s awakening. She hates the short “boy” haircut her mother insists on, while Paul is ashamed of how much hair he has. Her mother calls her Kevin, his mother doesn’t call at all.

Similarly, Martell delivers true tenderness and longing behind Mark Garbarino’s impressive makeup, while Giannamore is a heartwarming example of defiant positivity. Both actors and their characters bond quickly, and screenwriter Olivia Dufault (also transgender) finds a power that eludes so many YA dramas via the subtle genius of writing Aristiana as a secondary catalyst.

We already feel for Paul, so Aristiana’s effect on his self image is something we feel without being told. The point is made organically, with wit and wisdom, and much more resonance. What Paul finds at the end of his journey is sweet, but just gravy.

Wolfboy is the rare teen drama that speaks without condescension, and entertains without calculation.