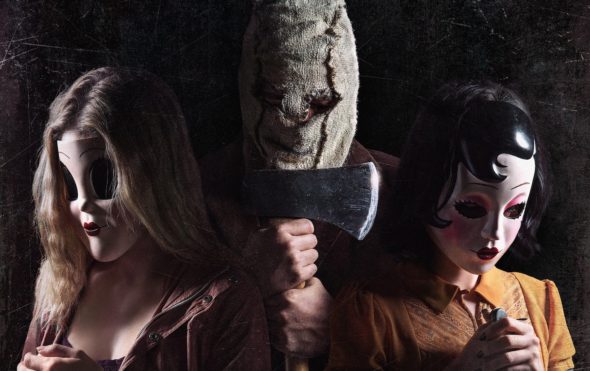 Sequels are hard. Especially when you don’t understand what made the original so unnerving and memorable.

A decade ago, Bryan Bertino released the almost unbearably slow burn of a home invasion film, The Strangers. The underappreciated gem quietly terrified attentive audiences, beginning with the line, “Is Tamara home?”

A loving but bickering family spends the night at a lakeside campground and trailer park. A great deal of exposition ensures that you catch on, but the main gist is this: problem child Kinsey (Bailee Madison) is at odds with her beleaguered parents (Christina Hendricks and Martin Henderson) and her golden-child brother (Lewis Pullman).

Yes, our three masked malcontents have also settled into that same lakeside trailer park, now mainly vacant in the post-season.

Where Bertino’s horror had the languid melancholy of the old country blues tunes scratching away on a turntable, Roberts prefers the power ballads of the early Eighties. In fact, instead of the cinema of the Seventies that inspired Bertino, Roberts prefers 80s fare, from the early MTV soundtrack to the Argento-esque title sequence to the campground setting.

This is a self-conscious slasher with jump scares, frequent bloodletting and a marauder who is profoundly difficult to kill.

Roberts borrows a lot. Not just from Bertino’s original, but also scads of other horror gems from across the eras (Texas Chainsaw Massacre, The Town that Dreaded Sundown, Friday the 13th, Bava’s Carnage and so many more).

And while cinematographer Ryan Samul cannot grip you with dread the way Peter Sova’s creeping camera and quiet wide shots did ten years back, he can frame a shot.

That shot 1) has usually been lifted from another source, and 2) often contains a nearly-ludicrous image. Still, there are more than a few beautifully macabre sequences in this movie. One poolside episode is particularly impressive.

Still, the main problem with The Strangers: Prey at Night is that it gets comfortable in clichés, where the stinging original subverted them. That doesn’t make it a bad movie. It’s not. It’s a nasty little piece of entertainment, unoriginal but competent.

And you cannot expect originality from a sequel, of course. You just hope it can be memorable. The Strangers: Prey at Night is not.