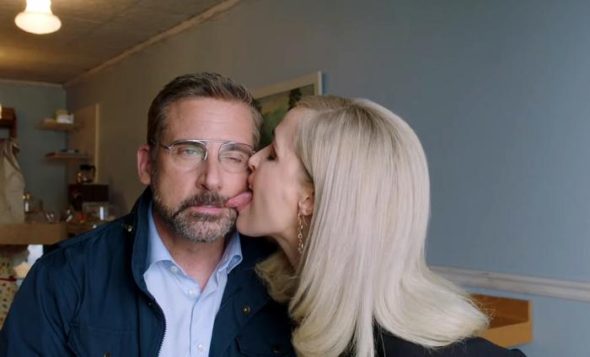 Some of the best moments during Jon Stewart’s years on The Daily Show happened when his guest was some smug politician who had not done their homework.

Because Jon always did his, and the squirming politico would realize pretty quickly that Jon could throw some heaters. This funnyman was whip smart, too, and pretty handy with the b.s. detector.

It should come as little surprise, then, that Irresistible, Stewart’s second feature as writer/director, employs some purposeful, intelligent comedy as it sets about skewering today’s ridiculous political climate.

Zimmer decides right then that Col. Jack Hastings (Chris Cooper) and his “redder kind of blue” appeal could be the centerpiece of a new nationwide project to expand the Democratic base. And it all begins with getting Hastings elected Mayor of Deerlacken.

This does not go unnoticed on the other side. Once GOP strategist Faith Brewster (Rose Byrne) and her crew come to town, the Mayor’s race in Deerlacken starts carrying some pretty high stakes – including one hilarious sexual side bet between the two opposing operatives.

After an impressively dramatic filmmaking debut with 2014’s Rosewater, Stewart returns to the satirical stomping grounds where he became a respected (and, to some, reviled ) voice that drove many worthwhile conversations.

Though the bite of this screenplay may be a bit softer, his narrative approach betrays a long game that trades the sharper knives for the chance at a wider reach. Because the cure for what’s infecting American politics is not going to spread through niche marketing.

Sure, you could call that a sellout, and for the first two acts of this movie you might be right. The “all politics is local” premise is certainly not new, nor are many of the talking points. But thanks to the two veteran leads, those points are just funnier.

Carell’s default manner is perfect for the quietly condescending Zimmer, an elitist who confuses nobility with blind ambition, and somehow thinks he has a shot with the Col’s much younger daughter (Mackenzie Davis).

The real treat, though, is seeing Byrne finally dig into another role worthy of her comedy pedigree. With the right material, Byrne is a comedic MVP, as she reminds anyone who’s forgotten that fact by making Brewster one hilarious, shameless, priceless piece of work.

Stewart may be known for his progressive leanings, but both the left and the right are in his sights here, along with unchecked political cash and obsessive pundits complicit in fostering the fear and shame game.

Easy targets? Sure. But if you don’t think Stewart’s smart enough to know that, than you never saw him blindside a back-slapping incumbent on late night TV.

Irresistible caters to your expectations just long enough to make you think you knew where it was going all along. The unassuming way the film upends those expectations might seem overly convenient, but it feels right, as if Stewart is practicing what he is taking care not to preach. And that’s just what might make it hard for mainstream America to resist.

← Belle of the Ball
Large, Not In Charge →
Scroll Up