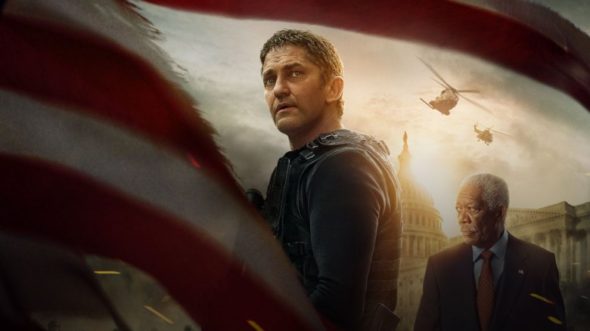 Olympus, then London, now Angel. They keep Fallen, must they keep getting up?

To be fair, Angel isn’t nearly the dumpster dive we took in London. It sports comic relief from Nick Nolte, a fun mid-credits stinger and a truly impressive performance from a baby.

Surrounding all that, though, is a pedestrian and all too often obvious gotta -clear-my-name frameup that underdelivers on the action front.

Gerard Butler is back as Secret Service hero Mike Banning, with Morgan Freeman returning to the franchise as now-President Trumbull.

Mike has headaches and insomnia after years of action, but debates leaving the field for a desk promotion. He is still great at knocking out all the baddies who are nice enough to walk blindly past a corner he’s hiding behind, but when there’s a drone attempt on the President’s life, Mike can’t keep his entire team from being wiped out.

Suddenly, mounds of incriminating evidence point to Mike as the would-be assassin, who then must leave his wife (Piper Perabo) and child (that baby is good, I’m telling you) and go full Bourne fugitive guy to root out the real villains.

Who wants the President dead? And why?

If the answers are supposed to be surprises, someone forgot to tell director Ric Roman Waugh (Snitch) and his co-writers, asAngel is telegraphed from many preposterous angles with all manner of heavy handed exposition.

And once Banning takes refuge with his long lost, off the grid, battle scarred Dad (Nolte), the attempts at debating the morality of war land with a thud of pandering afterthoughts.

Hey, if your just here for some mindless action highs, that’s fine, but Angel skirts them, curiously settling for repetitive shootouts and nods to first-person gaming enthusiasts.

Like Mike, this Fallen seems mostly tired. Even if it can get up, maybe it should reconsider.

← Screening Room: Ready or Not, Peanut Butter Falcon, Angel Has Fallen, Nightingale, One Child Nation
River of Dreams →
Scroll Up