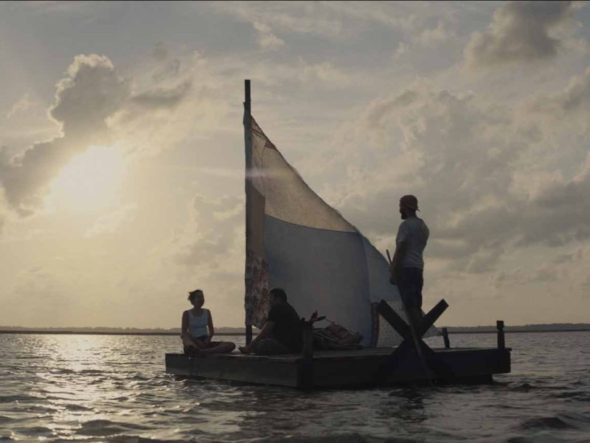 Zack Gottsagen wanted to be a movie star.

Filmmakers Tyler Nilson and Michael Schwartz told Zack there just weren’t many roles available for actors with Down Syndrome.

He asked if they could write him one.

The result is The Peanut Butter Falcon, an irresistibly endearing adventure powered by an unwavering sincerity and a top flight ensemble that is completely committed to propping it up.

Zak (a terrific Gottsagen), getting an assist from his elderly roommate (Bruce Dern), makes a successful break from his nursing home quarters with a mission in mind: finding the wrestling school run by his idol, the Salt Water Redneck (Thomas Haden Church).

Tyler (Shia LeBeouf) is also running – from a big debt to a small time tough guy (John Hawkes) – and when Zak stows away on Tyler’s rickety boat, the two embrace life on the lam as Zak’s case worker Eleanor (Dakota Johnson) slowly closes in.

The quest carries obvious parallels to the real Zack’s Hollywood ambitions, and the Nilson/Schwartz directing team lovingly frames it as a swamp-ridden fable full of Mark Twain homages.

You get the sense early on that this is the type of material that would crumble if any actor betrayed authenticity for even a moment. It also isn’t long before you’re confident that isn’t going to happen here.

LeBeouf is tremendous as the wayward rogue whose inner pain is soothed by his bond with the stubbornly optimistic Zak. The chemistry is unmistakable, and ultimately strong enough to welcome the arrival of Johnson, who gives her Eleanor layers enough to embody our fears of the “real world” puncturing this fairy tale.

The surrounding ensemble (including Jon Bernthal and real-life wrestling vets Mick Foley and Jake “the Snake” Roberts) and rootsy soundtrack color in the last spaces of a world wrestling with convention.

Sure, you’ll find glimpses of feel good cliches. What you won’t find is condescension, or the feeling that anything here – from the characters or the filmmakers alike – is an act of charity.

Often similar to last year’s Shoplifters, The Peanut Butter Falcon is all about embracing family where you find it.

Following a dream, Zak finds it. And we feel it.

← Stay Down
Bird of Prey →
Scroll Up