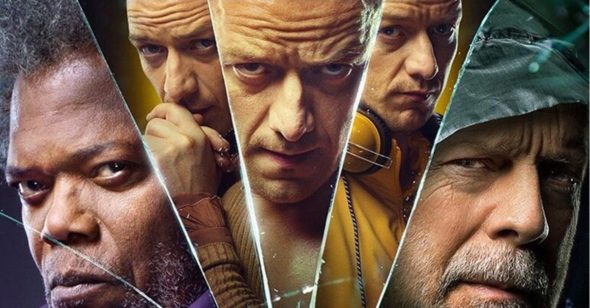 M. Night Shyamalan has been grappling with expectations for nearly twenty years. They were high when he was blowing our minds with twist endings, but the craving for another Sixth Sense experience led its follow up, Unbreakable, to be wrongly labeled as a step down.

After years of diminished returns led to zero expectations for a Shyamalan project, Unbreakable began to get its due in retrospect, a hand the writer/director played perfectly with the riveting Split three years ago. That film stood tall on its own, but when the drop-the-mic final scene revealed it as an Unbreakable sequel all along, expectations for the next round went skyward pretty damn fast.

Or was that just me?

I know it wasn’t, and while Glass caps the trilogy with a dive into comic book lore that is completely fascinating to watch unfold, it lands with a strangely unsatisfying thud.

Split left us with The Beast – the most dangerous of Kevin Crumb’s (James McAvoy) “horde” of personalities – on the loose in Philly. Glass begins with David Dunn (Bruce Willis), who has spent the years since Unbreakable running a security firm with this son (Spencer Treat Clark in a nice return) and walking the streets as a mysterious vigilante hero dubbed “The Overseer”, tracking him down.

Their standoff leads to an early burst of crowd-pleasing action, and a trip to the psych ward for both Crumb and Dunn – the very same hospital where Elijah “Mr. Glass” Price (Samuel L. Jackson) has been serving his life sentence.

Dr. Ellie Staple (Sarah Paulson) arrives to define the film’s central conflict, telling them all that superpowers are only for comic books, and everything remarkable about their lives can be deconstructed and explained, much like a magic trick.

Shyamalan’s feel for pace and sequencing is fine here, as is his changing color saturation when superhero themes gain strength. The film’s first two acts build a compelling arc on the fragility of human potential set against the ambitious premise of comic books as real life.

As Crumb and his 23 identities, McAvoy is completely mesmerizing once again, able to move freely between contrasting personalities with such incredible precision the understated performances around him seem only right.

Willis’s default setting of steely glares serves him well as the reluctant savior, Jackson gives his scheming mastermind the right mix of brilliance and condescension, and Paulson wraps Dr. Staple in a fitting air of mystery from her first introduction.

It is only Anya Taylor-Joy, returning as Casey “the girl The Beast let go,” whose talent seems ill-placed. While Casey is seemingly there as a reminder of Crumb’s humanity, the frequent tight closeups on Taylor-Joy’s comic book ready eyes become a heavy handed blur to the message.

But with Split putting Shyamalan firmly back in his groove, expectations for an unforgettable end to the trilogy create a uniquely painted corner. Potent storytelling gives way to declarations that ring of self-serving defenses of the filmmaker’s own work, while more obvious foreshadowing overtakes the nifty, hide-in-plain-sight subtlety.

Would Glass have worked better if we hadn’t been standing around staring all this time? Probably. but Shyamalan got us here with skill, and he gets us out with a film that’s easy to respect, but hard to cheer for.

Subscribe in a reader
← Eat the Soup!
Family Matters →
Scroll Up