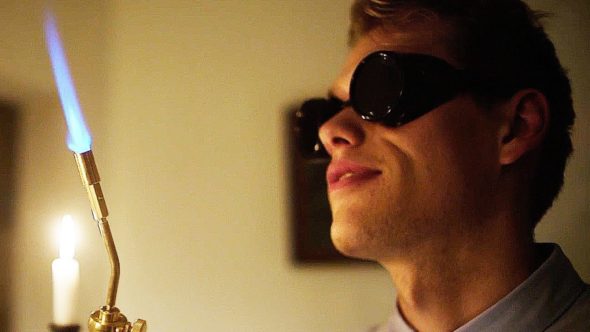 How does one create a Patrick Bateman?

Weiner plays Alex. Alex is a college freshman and a nerd. He’s joined by buddies Ethan (Phillip Andre Botello) and Justin (Zachery Byrd), the three forming a trio of losers looking for acceptance. As the day of fraternity pledge party embarrassments wears on, a pretty girl shows up from nowhere and invites the buddies to a different kind of party.

Who can say too “good to be true”? Well, anybody who’s ever seen a movie, but Pledge has some surprises hiding behind those kegs.

The film’s first obvious strength is the cast. Each of the primary trio of actors delivers a believable outcast, and their chemistry feels fresh and honest enough that you never doubt their actions.

In fact, all the performances are quite solid—the good guys occasionally unlikeable, the bad guys sometimes teetering on sympathetic—and the writing is sharp.

Once Robbins has you rooting for his sad sack heroes, the film works well enough as a straightforward exercise in bloodlust and torture. And nasty ass soup.

But where Weiner’s savvy script and Robbins’s sly direction really excel is in digging into this predictable plot (see Hostel, American Werewolf in Paris and any number of other “hot chick invites doofus guys to a party at their own peril” subgenre) to find an ugly picture of American privilege.

Pledge is no masterpiece. It is, however, a tightly packaged, insightful and mean little flick.