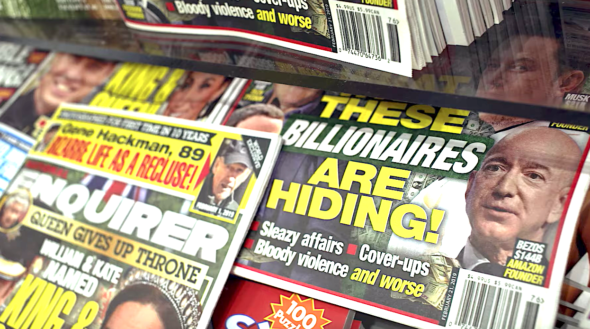 Scandalous: The True Story of the National Enquirer

“How did a tabloid subject get to be President of the United States?”

In telling the tale of the birth, rise and fall of the National Enquirer, Landsman is also drawing a fairly persuasive roadmap to America’s current standing as a place where, in the view of no less than Carl Bernstein, no fact-based debate is even possible.

Born to original owner Generoso “Gene” Pope from a no-interest mafia loan, the Enquirer had a simple goal: sell the most papers, period. Taking inspiration from roadside gawkers at a grisly accident, Pope printed the crime scene photos others didn’t.

But when the rise of suburbia meant less lines at the newsstand, Pope made a genius move to the supermarket checkout line. And since blood and guts don’t mix too well with the bread and milk, the Enquirer went all in on celebrity gossip.

Using press badges for nifty introductions, Landsman rolls out a succession of former Enquirer reporters and editors, none of whom can hide their fondness for the memories. It was an intoxicating working environment of bottomless expense accounts, cutthroat competition and a ruthless dedication to getting the story.

It wasn’t about facts, it was about eyeballs. Start with some sliver of truth, and then cater to the core (“Missy Smith in Kansas City” the staff called her) with unapologetic sensationalism.

Let the public decide, right? They have a right to know. Except when they don’t, because “catch and kill” protection deals started decades before Donald Trump. Landsman scores with those details, but curiously omits any mention of successful legal pushback from celebrities such as Carol Burnett.

The paper’s backstory is informative and intriguing, but the red meat of Scandalous comes fittingly from scandals. The coverage of both Gary Hart and O.J. Simpson not only brought new journalistic respect to the Enquirer, but ushered in a new approach to journalism itself that is still being debated.

“That’s not my problem,” says a former editor. “It sold papers.”

It did that. But Landsman argues it also blurred lines that became ripe for exploitation by a new owner with a political agenda, something – according to all former staffers interviewed – the Enquirer had always avoided. After that, greasing the political rails of longtime Enquirer darling Trump became almost inevitable.

But above all, Scandalous resets the folly in underestimating the Enquirer’s legacy. When we listen to a reporter’s recording of a much younger Trump calling to plant favorable stories by posing as a “Trump insider,” it feels like a visit from the Ghost of Christmas Past.

So how did the checkout aisles evolve from promising dirt on the latest celebrity divorce to serving up blatant political propaganda? In the words of one former reporter, the Enquirer simply got “out-Enquired.”

← Ice Ice Baby
Can You Hear Me Now? →
Scroll Up