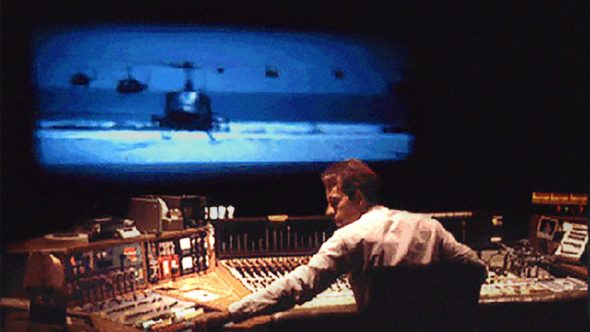 Okay, reel talk: I’m a sound nerd, so I probably geeked out over Making Waves: The Art of Cinematic Sound a bit more seriously than your average bear.

But if you’re even a little bit at home in the foam-padded clubhouse with us audiophiles, rejoice! Director Midge Costin has given us our overdue salute to the history and pioneers of big screen sound design.

Costin, a veteran sound editor making her directorial debut, does seem mindful of avoiding an approach only digestible by techies. Her straightforward timeline of sound design history may lack style points, but it’s layered with plenty of movie clips and director interviews to rein in the average movie buff.

The sincerity of Steven Speilberg’s statement that “the ears lead the eyes to where the story lands” is echoed by other film greats who seem genuinely pleased to discuss a side of the craft they’re rarely asked about.

And we see that – like so many aspects of cinema – modern sound design took root in the 1970s, as mavericks such as Spielberg, Coppola, Lucas, Lynch, Streisand and Scorsese began to re-shape Hollywood.

It’s through these legends that that we’re introduced to sound design legends Ben Burtt, Walter Murch and Gary Rydstrom. Their names may not be as familiar, but Costin wants to make sure you understand that their contributions are just as monumental.

Showcasing a wealth of information with an engaging pace, Costin finds an easily enjoyed sweet spot between the tech geek and casual movie fan. Ultimately it’s a film that can satisfy as both an intro to further research or a complete quick-study course, making Making Waves sound like a winner.