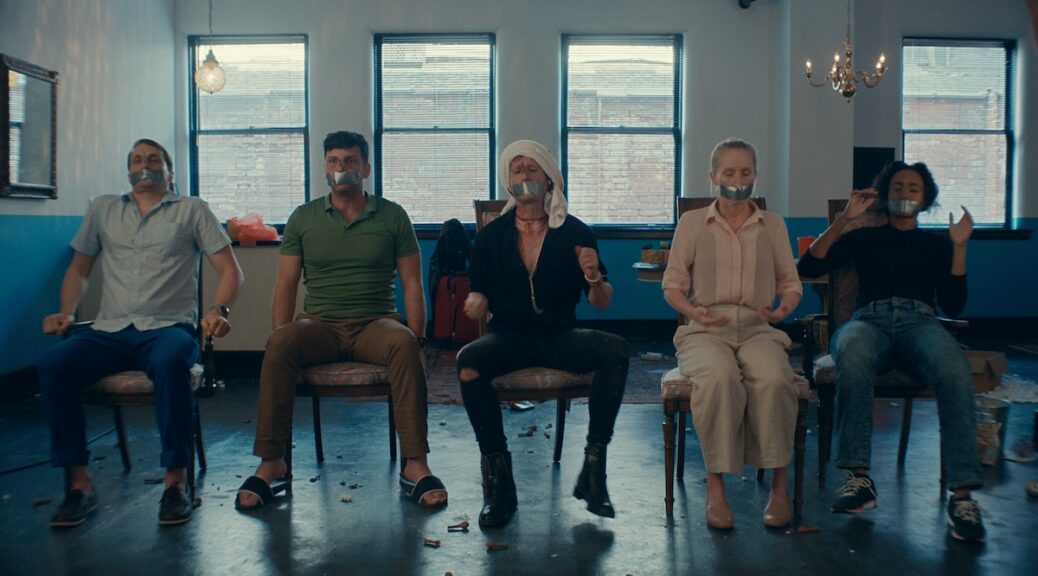 Because if you’re looking to sum up Stanleyville in such generic terms, good luck to you.

It’s a weird movie. Which is not necessarily a bad thing.

In his feature debut, director and co-writer Maxwell McCabe-Lokos serves up an offbeat comedy that is equal parts exaggerated and restrained, one that’s anchored by the quiet existential dread of Maria (Susanne Wuest from Goodnight Mommy).

Startled by a hawk flying into her office window – and the lack of a reaction from her co-worker – Maria walks off away from her job, her family and the few material things she’s carrying with her. Slumped and staring blankly ahead from a massage chair at the local mall, Maria’s approached by older gentleman in an ill-fitting suit. Oh, and his name is Homunculus (Julian Richings).

What’s this? Maria’s been chosen from among “hundred of millions of candidates” to compete in a contest. And not just any contest, a “platinum level exclusive contest!”

Maria’s in, and she reports for duty to find four other contestants (with names like Bofill Pancreas and Manny Jumpcannon) ready to battle for that sweet habanero ride. As Homunculus explains the ten rounds of competition (“Uh, there’s only eight up there.”), check that – eight rounds of competition, contrasts are drawn between Maria and her opponents.

She’s up against a hedge fund d-bag, a muscle bound jock, the fame whore and the badass bitch. McCabe-Lokos fits all four into clearly purposeful stereotypes, while Maria is reserved and harder to read.

The eight rounds are bizarre and abstract, with the microcosm of society breaking down along familiar lines as desperation grows to get the grand prize, along with the validation of conquering “the very essence of mind-body articulation.”

The brand of satire is indeed fascinating and ambitious, it’s just never more than dryly clever. Even at barely 90 minutes, a sense of drag seeps into the film, and though McCabe-Lokos shows definite promise for the future, Stanleyville hits the final bell more of a curiosity than a champion.