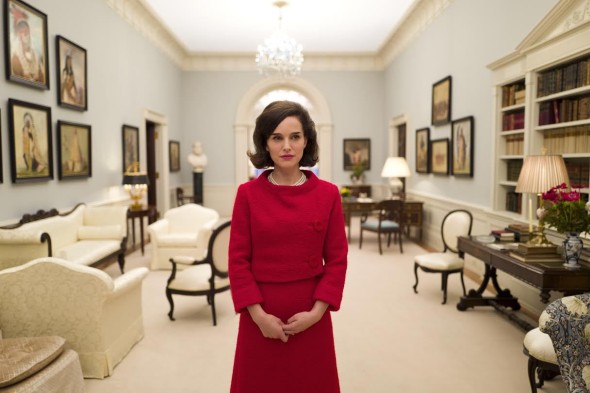 Director Pablo Larrain disregards traditional biopic structure and reshapes it to hypnotic effect in Jackie, a challenging portrait of First Lady Jacqueline Kennedy as she struggles with the shock and grief of her husband’s assassination.

Anchored by a committed, luminous lead performance from Natalie Portman, Jackie emerges as a surreal character study layered with the intimacy of a soul struggling to balance public demands with private resentment.

With one of history’s most famous women as his subject, Larrain (Neruda, Tony Manero) wisely narrows his focus to these watershed moments, adding unspoken gravitas to the film through what we already know about the rest of Mrs. Kennedy’s life. In the whirlwind of November 1963, she had a husband to honor, children to reassure, and a future to guard.

Armed with a confident screenplay from Noah Oppenheim, Larrain is able to carve piercing insight from an unobtrusive viewpoint. He pivots from grand, showy tableaus to hushed privacy, deftly reinforcing the weight of the dueling identities at work inside Camelot. Portman is an understated wonder, making Jackie’s mournful devastation cut as deep as the jaded wisdom she grants an inquiring journalist (an excellent Billy Crudup).

A meticulous, complex statement buoyed by vital history and raw humanity, Jackie defiantly delivers on an uncompromising vision of a story we know well, but can never understand.

← Let Some Light In
My Lives as a Dog →
Scroll Up