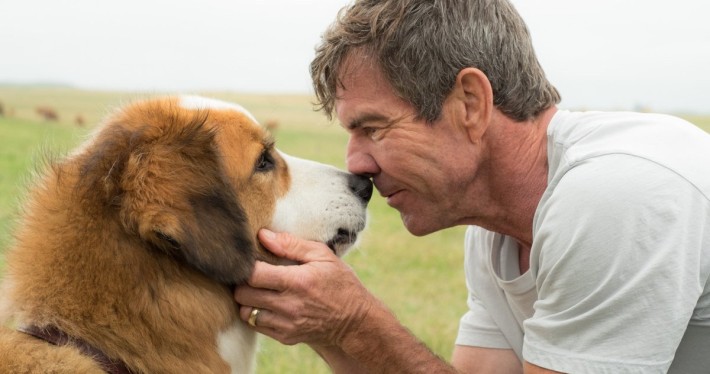 Dogs sure are cute, and they can teach us many things. Apparently, though, subtlety and the tenets of reincarnation are not among them.

A Dog’s Purpose, based on the novel by W. Bruce Cameron, follows the various lives of a pooch first known as Bailey, a Michigan farm dog growing up happily in the 1960s after young Ethan rescues the Retriever pup from a hot car. From there, Bailey becomes a Chicago K9 Shepherd named Ellie, then a cute Corgi in 1980s Georgia, and back to Michigan as one of those unfortunate dogs tied to a tree all day.

The dog’s soul (voiced with overdone preciousness by Josh Gad) remains constant throughout, and constantly serves as an eager-to-please Captain Obvious. Imagine walking by a man vomiting as his sad-eyed dog remarks, “oh, he must be sick.” Now imagine it for ninety minutes.

Director Lasse Hallstrom (Chocolat, The Cider House Rules) and writer Cathryn Michon draw each character and every situation with the most broad, most one-dimensional brushes available, efficiently plowing through a checklist of contrived plot points seemingly chosen for utmost manipulation potential. Even a modest farmhouse isn’t complete without a picture perfect crescent moon above it, situated like the northern star in a cloudless sky.

Framing the story through the simplicity of a canine viewpoint may have been a worthwhile goal at some point, but the mix of melodramatic schmaltz and slapstick comedy (dog on the loose at a fancy dinner!) quickly becomes overbearing. Yes, the pets are lovable, but ultimately a film aimed at dog lovers develops the foul odor of exploiting what it claims to celebrate.

The recent video alleging animal abuse during filming is also a concern (trainers have claimed the video was falsely edited), but trust me, there are plenty of other reasons to avoid A Dog’s Purpose.