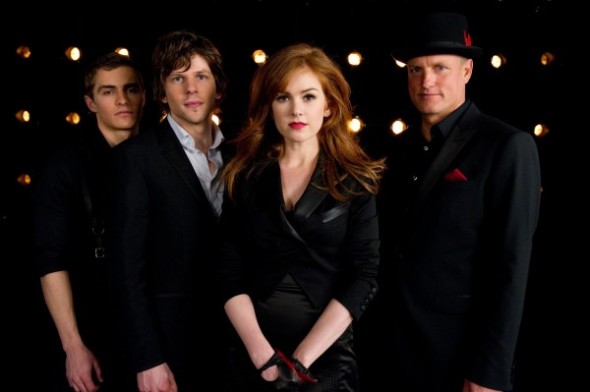 Now You See Me

In the fall of 2006 we saw back to back films about magicians – The Illusionist and The Prestige. I remember thinking, really? Why?

Well, with just two months separating the release of The Incredible Bomb about Burt Wonderstone from this weekend’s Now You See Me, it’s hard not to scratch your head again at Hollywood’s insistence on our interest in magic.

At least Prestige and Illusionist were half decent films.

Jesse Eisenberg and Woody Harrelson lead a group of magicians who seem to pull off a bank heist during their show, and promise more of the same. Mark Ruffalo turns into the Hulk and smashes up their hall of mirrors.

No, instead he teams with Inglorious Basterds’s Melanie Laurent – an INTERPOL agent – to prove there’s no such thing as magic and that these guys are plain old crooks.

Unless it’s all an illusion…

Cons, comeuppance, love and daddy issues crisscross with lackluster acting to keep you from wondering whether Michael Caine (who was also in The Prestige. Of course he was!) or Morgan Freeman have milkier eyes. They’re both getting quite old. Maybe they should turn down one or two of the films released in any given year. Perhaps see an ophthalmologist.

They both certainly deserve better than this undercooked mess, directed by style-over-substance maestro Louis Leterrier (The Transporter, Clash of the Titans). With his characters talking incessantly about sleight of hand, you’d think Leterrier might employ that particular tactic on his own. Maybe razzle dazzle us while the con happens right under our noses.

Instead, perfectly ludicrous tricks and schemes are re-enacted without regard to plausibility. Rather than lifting the curtain to unveil anything tricky, the approach only uncovers some very lazy filmmaking.

Wasting a cast that has accumulated a combined 3 Oscars and another 4 nominations is a trick in itself, but aside from Harrelson’s natural charm, nothing about the performers impresses. Workhorses Freeman and Caine come closest to delivering something akin to acting. When push comes to shove, the usually impressive Ruffalo is badly miscast, Isla Fisher flails against hideous dialogue, and Eisenberg phones in just another turn as a hyper-intelligent dick.

And on top of it all, they play magicians.

Seriously, who gives a shit about magicians?