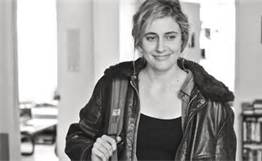 As a filmmaker, Noah Baumbach tends to bombard an audience with characters he dares you to find sympathetic. From The Squid and the Whale to Margo at the Wedding to Greenberg, Baumbach has filled the screen with damaged, self-absorbed neurotics. But his casual misanthropy met its match when he cast the effortlessly likeable Greta Gerwig in Greenberg.

The two team up again for Frances Ha. They share writing duties and Baumbach directs while Gerwig stars as a far cheerier spin on the helmsman’s typical protagonist.

A loosely sketched character study, the film relies heavily on Gerwig’s talent and honesty as she portrays Frances, a free floater who’s trying to change that about herself. Frances is a 27-year-old modern dance intern whose shelf life is becoming too apparent. Her BFF Sophie (an agreeably natural Mickey Sumner – Sting’s daughter) has even moved on to career and commitment.

Suddenly Frances feels she’s outworn the welcome of her carefree youth, and as Frances tries to shake free from her own arrested adolescence, a delightful journey emerges.

The film is far less structured than anything Baumbach’s done to date, feeling a bit closer to Gerwig’s mumblecore roots. But in sometimes subtle ways, Baumbach’s craftsmanship shines. This film is a carefully articulated idea masquerading as improv.

The result is equal parts Woody Allen, French New Wave and Jim Jarmusch, and amazingly enough, it never feels too hip for its own good. That’s likely because, swimming in Brooklynite hipsters, Frances is an adorable dork.

Gerwig says she and Baumbach began with snippets of conversations and small encounters, pushing those little moments to grow into a full picture. The result is as loose and musical yet precisely choreographed as a dance.

← Nothing to See Here
Get to Know This Guy →
Scroll Up