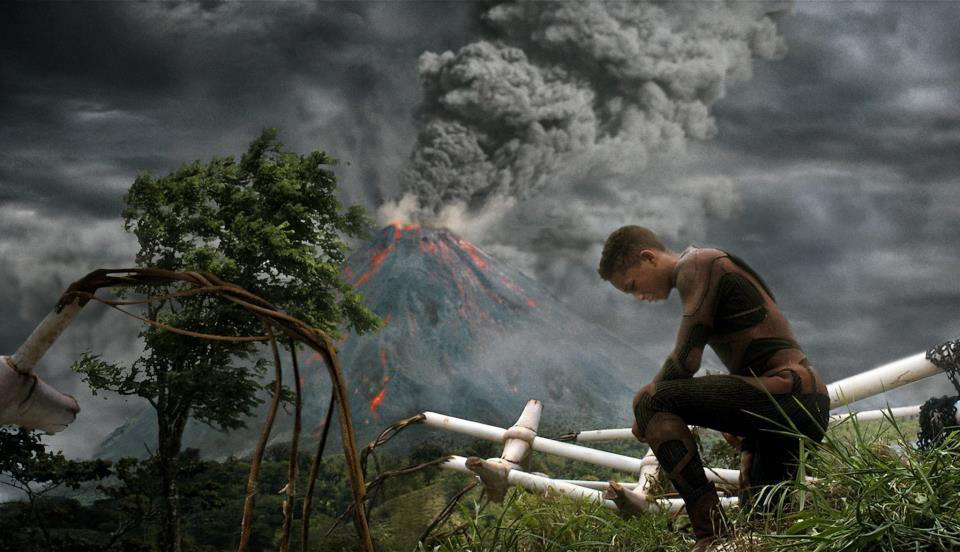 At the recent screening of After Earth, I overheard one lady say to another, “I don’t think I’ve ever seen a Will Smith movie I didn’t like.”

No doubt, the man has been a pretty reliable crowd pleaser for many years. His latest, though, is little more than a weak attempt to make his son the next big movie star in the house.

Jaden Smith gets top billing here, and well he should. Will is merely the co-star in a completely pedestrian sci-fi yarn about facing your fears, reaching your destiny, becoming a man, and zzzzzzzzzzz…..

It’s one thousand years in the future, and mankind has fled to a new home planet, after ravaging Earth until it was no longer hospitable. The bravery of military commander Cypher Raige (Will) has earned him hero status, leaving his son Katai (Jaden)  as a young cadet with big shoes to fill.

A crash-landing on the now-quarantined Earth leaves the father with two broken legs, and the son as the only hope for survival. Katai must journey through the dangers Earthlings left behind, as he searches for a distress signal miles away from their crash site.

Director/co writer M. Night Shyamalan, working from Will Smith’s story idea, continues his streak of films that make you wonder what the heck happened to the young auteur who gave us The Sixth Sense, Unbreakable, and Signs. There’s no reason to care about anything in the film; it comes at you without a hint of subtlety, as if you’re just expected to buy in simply because they’re selling.

It’s all so trite and obvious, from the environmental scolding to the boy yelling in the wilderness for his father to believe in him.

Will, apparently due to his character’s legendary calm and fearless nature, gives a one note performance anchored in scowling and lowering his voice. Jaden, after a nice breakthrough performance in the fine remake of The Karate Kid, can’t quite make Katai’s quest for manhood a convincing journey.

Heck, it doesn’t even have the look of a summer blockbuster, especially after the sublime scorched-Earth visuals just seen in Oblivion.

No offense to ladies at the screening, but even Will Smith isn’t likable enough to save After Earth.