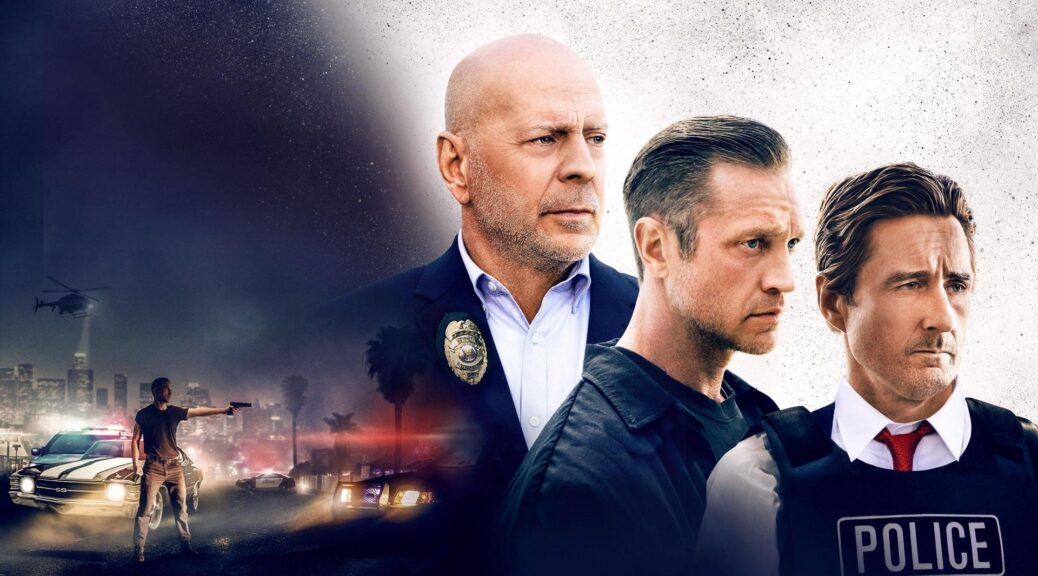 “Hey, Bruce Willis, how many movies do you have coming this year?”

In the month or so since the last Willis project with writer/director Edward John Drake – American Siege– was released, I’ve learned of the term “Geezer Teaser,” which is a perfect summation of how this genre usually operates. An aging star is featured heavily in the marketing, while their tangential character often just disappears midway through the film due to the star’s 1-day shooting schedule.

The good news for Gasoline Alley is that Willis hangs in ’til the end, and it’s clearly the best of the Willis/Drake collabs.

Luke Wilson joins in this time as well, playing Detective Vargas to Bruno’s Detective Freeman, and these two guys have four big problems. The bodies of four dead hookers have turned up, and a lighter found at the scene leads the two cops to Gasoline Alley, the L.A. tattoo parlor of ex-con Jimmy Jayne (Devon Sawa). Jimmy was also the last person seen with the dead hooker named Star (“If you forget it, just look up”), but do you think Jimmy’s going to sit back and just accept being framed?

Damn right he’s not. He’s going to let Willis and Wilson (Willison!) take some scenes off while he conducts his own investigation, sleuthin’ and shootin’ with an ever-present cigarette dangling perfectly from his steely pout.

Most everything about Drake’s films is varying degrees short of authentic. And though Gasoline Alley shows progress, details such as the set design, score and faux news reports still seem carelessly thrown together, which don’t give the forced noir dramatics much of a chance to cast a spell.

But if you’ve seen all of the Drake/Willis (Drillis!) catalog (and this is number five, with another currently in post-production), Gasoline Alley is a pleasant surprise.

Drake’s script (co-written with Tom Sierchio) has moments of self-aware humor – even poking fun at one of his previous films. And while Willis is again on autopilot, Wilson seems to be enjoying the “no F’s to give” attitude of his character, Sawa is commendably committed and Veep‘s Sufe Bradshaw turns in some fine support.

Is it ridiculous, overwrought and amateurish in spots? Sure, but this one is actually watchable.

Bravo, fellas, keep it up.