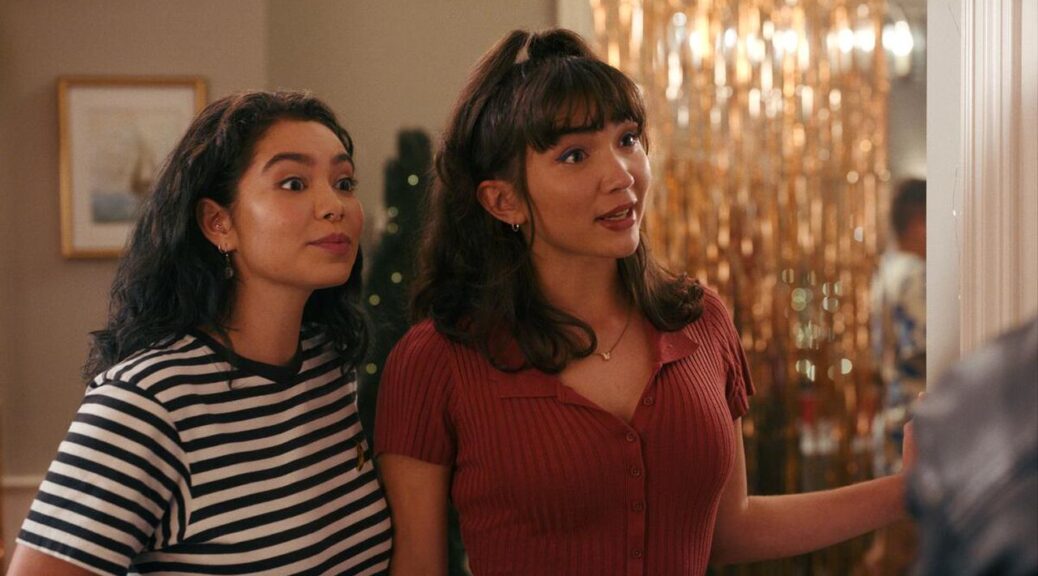 “That perpetuates a Christian narrative. We’re playing Seven Minutes in a Hotel Bathroom.”

Noted. So while the hormones here are as active as ever, the cage they’re raging in is awash in idealized hipness, as a trio of newbie filmmakers craft a feature debut full of genuine sweetness and winning humor.

Paige (Rowan Blanchard from TV’s Snowpiercer) is a Junior at Miller High, and being gay is the least of her drama right now. She’s struggling with the application to Cal Arts – her dream school – and she can’t find the courage to make a move on Gabby (Isabella Ferreira) – her dream girl.

But just when it seems Gabby is interested, Paige can’t quit thinking about another track teammate (Auli’i Cravalho, voice of Moana) who never seemed like her type.

Director Sammi Cohen invites us into an upper-middle-class teenage dream where kids are accepted and their choices are trusted. None of the stakes or the heartbreaks feel particularly dramatic, but the film itself finds resonance in being purposefully sanitized.

Screenwriters Kirsten King and Casey Rackham develop a nice groove that is self-aware without any awkward pandering to the teen audience. There are plenty of wink-winks to the formula they’re upending, and while the film is never as authentically sexual as last year’s Plan B, the occasional bawdy zinger does land.

Both Blanchard and Cravalho are irresistible charmers, with scene-stealing honors split between Megan Mullaly as Paige’s Mom (“Don’t take edibles before school, we talked about this”) and Aasif Mandvi as the track coach (“I know 60 percent of you are queer!”)

Wait, are Mom and Coach talking dirty to each other? OMGLOL!

Underneath all the horniness is a feel-good formula that may remind you of last year’s Oscar-winning CODA. But the emphasis in Crush showcases a high school world where the queer kids drive that formula. The film itself becomes a 90-minute safe space, where kids can just stress about their crushes instead of the reaction to whatever gender they may be crushing on.