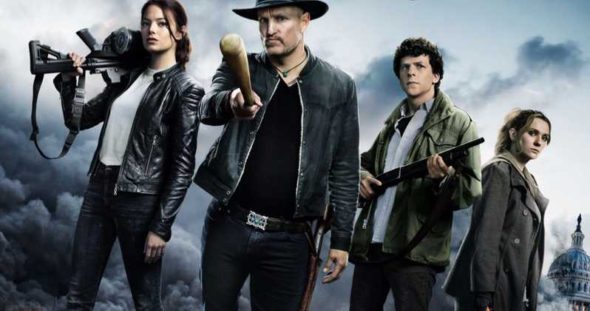 There you have it. A horror film that recognizes its desire to wallow in its former glory as well as its need to find something new to say.

We had our worries about the sequel to one of the all-time best zombie action flicks, Zombieland. Horror sequels so rarely work and Zombieland: Double Tap is slow going at the start, to be sure. But don’t give up on it.

Still, it was enough to draw the most important elements—all four leads. Among Woody Harrelson, Emma Stone, Jesse Eisenberg and Abigail Breslin are seven Oscar nominations and one win. That’s a lot of credibility for a zombie movie.

They reprise their roles, now ten years on as a heavily armed and somewhat dysfunctional family. Little Rock (Breslin), in particular, longs to leave the nest, get away from a smothering Tallahassee (Harrelson) and find people her own age. Wichita (Stone) may be feeling a little smothered in her relationship with Columbus (Eisenberg), though he remains blissfully unaware.

Things pick up when the girls take off, the guys brood, a new survivor enters the picture (Zoey Deutch, scene-stealing hilarious), and a sudden road trip to Graceland seems like it might reunite the family.

The filmmakers spend plenty of time simultaneously ribbing and basking in previous success. So there is plenty here to remind us why we loved the first Zombieland adventure so much (especially during the credits), although Double Tap doesn’t come to life until it embraces some fresh meat.

A run-in with near-doppelgangers (Luke Wilson, Thomas Middleditch) leads to an inspired action sequence inside the Elvis-themed motel run by Nevada (Rosario Dawson). A pacifist commune stands in for the amusement park from part one, letting everyone poke some blood-splattered fun at the culture clash between hippies, survivalists, and of course, the undead.

An underused articulation of the way zombies have evolved over the decade could have offered the biggest update. Still, after a 10 year wait, this revival offers just enough fun to not only avoid a let down, but instantly become Fleischer’s second best film.