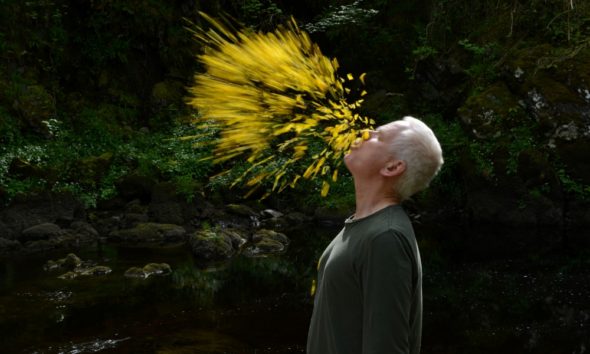 Leaning Into the Wind: Andy Goldsworthy

It’s the first word that comes to mind while watching Thomas Riedelsheimer’s documentary about artist Andy Goldsworthy. But that’s not a critique on the film itself, rather a reflection on the meticulous nature of Goldsworthy’s work, as well as Riedelsheimer’s.

Crafting art from nature, Goldsworthy spends a lengthy amount of time gathering his materials—leaves, flower petals, branches—then fastidiously arranges and assembles his materials into stunning works of art. It’s not only an exercise in creativity, but patience. When a gust of wind destroys hours of work, Goldsworthy takes it in stride, even though it’s the kind of setback that would leave many fuming.

To truly sink viewers into Goldsworthy’s world, into his thought process, Riedelsheimer is with Goldsworthy from start to finish as he assembles each new piece. Interviews and time spent on the sidelines observing while he works is as close as one can get to being inside the mind of an artist.

With breathtaking cinematography, the film itself is a work of art. As the viewer follows Goldsworthy around the world, the film captures the beauty of nature as Goldsworthy sees it. Knotted tree roots take on deeper meaning. Ants marching become more than insects on the ground, but a reflection of society. One of Goldsworthy’s more impressive installations is sparked by the ants. Riedelsheimer is there to capture the moment of inspiration as it turns into a stunning work of art.

There are times when the film covers the same ground. Much of the viewer’s time is spent watching as Goldsworthy (sometimes alone, sometimes with his daughter, at times with an entire crew) works on different installations. While interesting to see, it’s also repetitive, and the documentary is most engrossing when we’re allowed to follow Goldsworthy as he mines the continent for ideas.

Often the film has the feel of a nature documentary. The camera fades into the background as Goldsworthy works, becoming a silent observer, which gives the viewer an intimate look into his world. Goldsworthy becomes a part of the environment around him. Using his body, he becomes absorbed in the environment. The viewer feels the same absorption as we’re drawn deeply into his universe.

Leaning Into the Wind is a gorgeous, glorious film.

Subscribe in a reader
← Bury Your Gold
Shall We Play a Game? →
Scroll Up