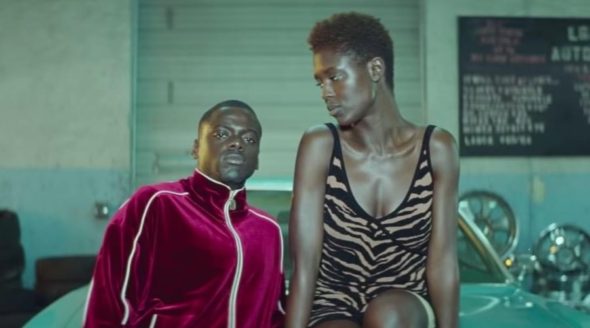 A white cop lies dead on a Cleveland roadside, while a young black couple is processing how a traffic stop escalated to the point of tragedy, and realizing they have a choice to make.

“Slim” (Daniel Kaluuya) is confident his actions were self-defense, but “Queen” (Jodie Turner-Smith) is a lawyer who knows what they’re up against.

They must run. Now.

The feature debut for both director Melina Matsoukas (TV’s Master of None, Insecure) and screenwriter Lena Waithe (Master of None, The Chi) has a righteous outrage that nearly burns through the screen. Working in beautiful tandem, they create a mix of gripping character study and urgent fable that speaks with brutal honesty about being black in America.

In Slim, we see the situation personally, while Queen is always there to remind him, and us, of the big picture, and why from now on, they can only go forward.

And from the moment we meet them – in the opening scene, out on their first date – Queen and Slim are real people we’re drawn to. Through wonderfully authentic dialog, they get to know each other (Who eats too loud? Who prefers “fat Luther?”) and we get to know them, all while they are running for their lives.

But honestly, it might still work if the two just worked in silence, as the chemistry between Kaluuya and Turner-Smith is a natural wonder. Her Queen is a smart, no nonsense woman who admits Slim wasn’t going to get a second date. But Turner-Smith allows Queen’s vulnerability to surface gradually, making her admission that she wants a man who will “cherish her bruises” all the more sympathetic.

Slim’s arc is equally valid with Kaluuya, who shot to Oscar-nominated stardom in Get Out, again flashing an admirable depth. As Slim softens Queen, he in turn absorbs her defiance, ultimately accepting their roles as cultural freedom fighters traveling a modern day underground railroad.

The effective contrasts aren’t limited to the main characters, as Matsoukas and Waithe populate their film with consistently resonant pushes and pulls, from romantic risk to shrinking options in wide open spaces.

A stop or two – such as Slim’s unlikely encounter with a gas station attendant – break the spell, but only for a moment. This is an unapologetic and purposeful first feature, as much a complex story of joy and love as incendiary protest parable.