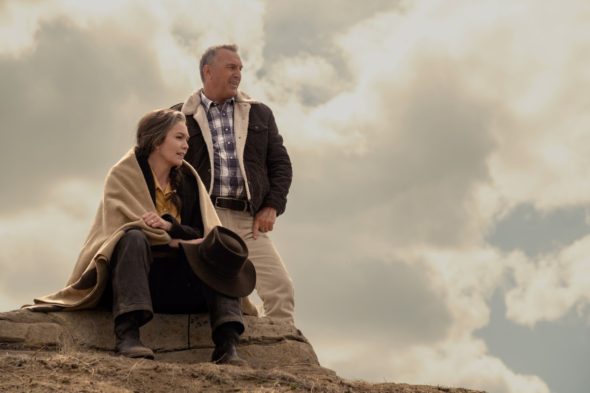 It feels like Kevin Costner and Diane Lane have made ten movies together, doesn’t it? They haven’t, but their low key and lived-in chemistry keeps you constantly invested in Let Him Go, a slow burning and effective revenge thriller aimed squarely at the older demos.

Costner and Lane are George and Margaret Blackledge, a retired Sheriff and his wife loving their status as grandparents to little Jimmy Blackledge in late 1950s Montana. The simple life turns tragic when their son James (Ryan Bruce) dies in an accident, and complicated when their daughter-in-law Lorna (Kayli Carter) marries the brooding Donnie Weboy (Will Brittain).

Donnie’s an abusive husband and stepfather, and without warning, takes Lorna and Jimmy back to his family in North Dakota.

George and Margaret decide to track them all down, finding out pretty quickly the Weboy clan don’t appreciate attention from strangers.

The flashpoint to this Western Gothic blood feud is matriarch Blanche Weboy, brought to scenery devouring life by the glorious Lesley Manville. Dragging on her cigarettes and demanding obedience, Blanche is quick to show the Blackledges how far she’ll go to keep Lorna and their grandson under her thumb.

Writer/director Thomas Bezucha builds the tension well, then uses Manville’s entrance as the natural catalyst for amped intensity. Adapting Larry Watson’s novel, Bezucha carves out the road to vengeance and redemption like a less nuanced Cormac McCarthy. This isn’t poetry, but that doesn’t mean it’s not primal and satisfying.

Costner’s in his comfort zone as a weathered country lawman, more invested and touching than he’s been in years. Lane grounds Margaret with a wounded but determined heart, stepping easily into the soul of the film.

After a tender kiss, a sixty-something husband telling a fifty-something wife, “Don’t start anything you can’t finish” could seem like a cheesy ad for Viagra. It doesn’t here, and that’s a testament to the authentic bonds of time, grief and love formed by Costner and Lane.

Even at nearly two hours, the secondary character development does feel slight, and some thematic possibilities of the Blackledge’s friendship with a young and wayward Native American (Booboo Stewart) are never quite fulfilled.

But Let Him Go is here for the adults at the ranch, with a solid American genre yarn full of few surprises, but plenty of bang for your buckaroo.

Subscribe in a reader
← Origami Original
Involuntary Tributes →
Scroll Up