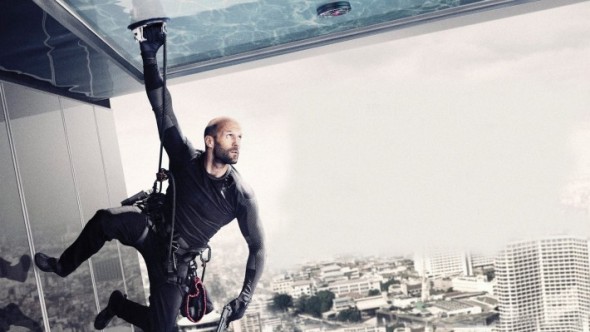 Who smells hot trash? Is it a dumpster fire?

Mechanic: Resurrection revisits the by-the-numbers Statham character Arthur Bishop. Back in 2011, Statham reprised the role first held by Charles Bronson in a middling-to-fair remake of The Mechanic. That film inexplicably merited a sequel that was not direct-to-home-viewing. Why that is confounds us.

Get nervous Gods of Egypt and London has Fallen – Mechanic: Resurrection wants that “worst film of the year” award, and it is not above soiling itself with incompetence to get it.

Bishop faked his own death years back so he could escape his pointless existence as an assassin, but an old enemy has tracked him down. And brought henchmen! And kidnapped master thespian Jessica Alba! Damn this confining shirt!

Statham removes his shirt no fewer than 8 times in the film’s 99-minute running time. That’s almost once every ten minutes. The man is 49, so good for him, and for that core audience he’s built over a career of shirtless man-on-man action.

Alba’s character development is more nuanced. She keeps her shirt on, but it’s always clingy and sometimes…even wet.

Remember how great Statham was in last year’s Spy? His turn as Rick Ford, uber-macho super agent, was hilarious specifically because it was sending up ludicrous movies just like Mechanic: Resurrection.

Bishop criss-crosses the globe with nary a toothbrush, yet at a moment’s notice he has access to countless bomb-making chemicals, ammunition, kick ass scuba equipment and multiple expensive watches. Then, before Bishop has to dive into shark-infested waters, the film is careful to show him applying a shark repellent lotion (patent pending), just to keep it real. Come on, by that point we’re expecting any sharks to have lasers on their heads on a direct order from Dr. Evil.

The sad thing is, this movie could have been saved. Make a few edits, give it a new score, call it Spy 2: Ford Gets His Own Movie, and you’ve got comedy gold. As is, this film is so bad John Travolta is jealous.