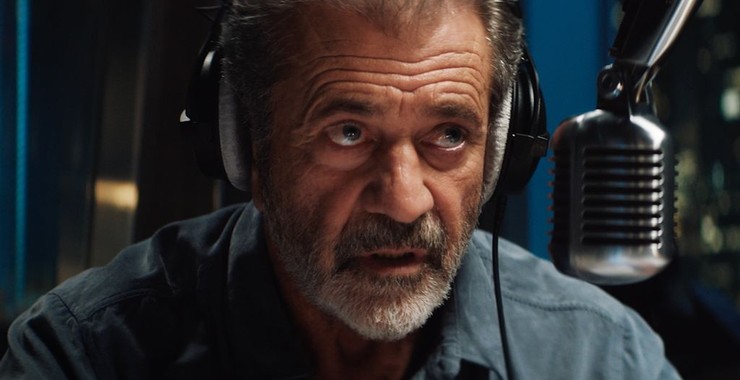 About halfway through On the Line, Mel Gibson stops the film’s traffic with a gem of self-awareness.

“What kind of B grade movie bullshit is this?”

Well, “B” grade might be generous, but more of that wink-wink vibe would have been helpful.

Mel is Elvis Cooney, host of an overnight radio talk show in L.A. On one fateful night, a caller reveals that he has broken into Elvis’s home and taken his wife and child hostage. To save their lives, Elvis will have to own up to a few past misdeeds, then play some survival games while trying to piece together clues to the caller’s identity.

Writer/director Romuald Boulanger has a surprise or two in mind, but everything from the film’s forced dialog to the telegraphed shot selection and generic staging screams unsurprising TV drama. Mel and co-star Kevin Dillon ham it up good, while the rest of the ensemble mostly seems self-conscious.

I’ve been lucky enough to work in radio for over thirty years, but there’s no point in nitpicking over the biz details. The bigger problem is that On the Line is a half-hearted mashup of 2 or 3 better films that I won’t mention for fear of spoilers.

But when Elvis’s call screener (Alia Seror-O’Neill) makes a crack about sex with a man his age, you remember the B-movie line and realize this might have been idiotic fun if it just didn’t take itself so seriously.