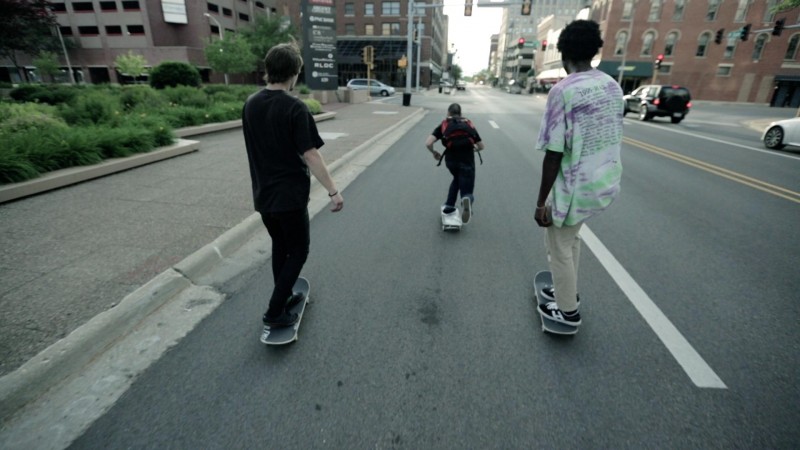 In the Oscar-nominated documentary Minding the Gap, a Sharpie-scrawled proclamation on a skateboard declares, “This device cures heartache.” And despite the free-flowing and exuberant skateboarding footage, it is the way first-time director Bing Liu chronicles those heartaches that enables the film to soar high above skatepunk stereotypes.

It’s anchored by footage Liu began filming over a decade ago, while still a restless teen in Rockford, Illinois. Liu and his friends Zack, Kiere and Nina forged early bonds through the joy they found in skateboarding and the escape it provided from their troubled home lives.

Spurred by the foresight of wisdom beyond his years, Liu began focusing his lens less on “big air” tricks at the local skate park and more on what he and his friends were experiencing on the way to adulthood. It results in a consistently touching ride.

Liu, who’s been working behind the scenes on various film and TV projects the last several years, displays remarkable instincts assembling his first feature. He weaves old and new footage deftly, drawing us into the lives of he and his friends with an amazing knack for knowing just when a shot needs to be held one beat longer, or when a quick cut to a Rockford billboard might subtly underscore the issues at hand.

And as the kids grow into young adults, their interviews sometimes reveal amazingly clear bits of self-assessment. Zack and Nina face a tough road as new parents, and when a troubling issue threatens their relationship, Liu frames it with skillful delicacy. Kiere has an enthusiastic spirit and a bright smile you won’t forget, even when you can’t ignore the pain hiding behind it. It is a pain that Liu shares, something he believes connects them all and inspired the direction of his film.

It’s instantly easy to care about these young people, about what they are going through and where they might end up. And it is through them that Liu is able to organically present a microcosm of America itself, beset as it is with issues of race, class, violence and opportunity.

Minding the Gap entertains as a testament to the love of skateboarding, but it transcends as an emotional statement on the fragile bonds of parenting and an earnest ode to the power of love.