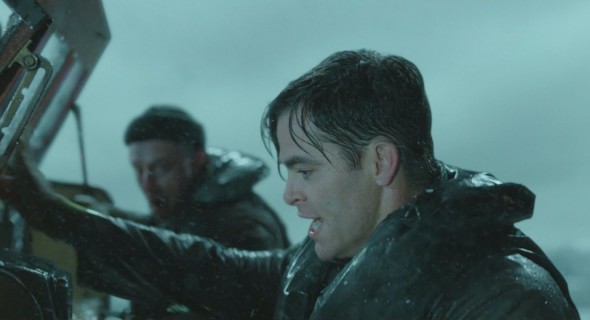 Plenty of films have created genuine tension telling stories where the outcome is already known. The Finest Hours may not reach the lofty heights of say, Argo, but it crafts a true-life adventure tale with an earnest and sometimes thrilling respect for the bravery involved.

Most of that respect goes to Bernie Webber (Chris Pine), the young Coast Guardsman who directed the greatest small boat rescue in the group’s history. In 1952, Bernie and a small crew braved brutal elements off the coast of Cape Cod to search for a stranded oil tanker that had been broken in half by the storm.

Director Craig Gillespie (Lars and the Real Girl, Million Dollar Arm) seems most engaged by the set pieces involving the floundering tanker. As a desperate crew relies on the crafty ideas of Mister Sybert (Casey Affleck) to stay afloat, Gillespie creates a nicely paced contrast between the shrinking confines of the ship and the vast timelessness of the rising waters.

Back on land, we see an idealized, one-dimensional version of the 1950s. Bernie’s courtship of his future wife Miriam (Holliday Grainger) is sweet but superficial, as is most of the setup at Coast Guard base. The screenwriting team of Scott Silver, Paul Tamasy and Eric Johnson (The Fighter) draws parameters quickly, and for obvious purposes.

Bernie is a stickler for regulations, on a mission loaded with impossible obstacles. The more both points are labored, the less impactful it becomes when they fall away.

Pine has genuine movie star charisma, and he underplays Bernie nicely, but it is Gillespie who ultimately saves The Finest Hours. Not only does he make the sentimentality of the period details seem awkwardly appropriate, but lines such as “sometimes men die” and “not on my watch!” are more quickly forgiven amid spectacular storm sequences and the palpable tension of the actual rescue.

As effective as its finest moments may be, what The Finest Hours needs most is a deeper humanity to make it resonate after the credits. You end up saluting these heroes more than caring about them, keeping any lasting sea legs at bay.

← Hey, What’s That Z About?
Fright Club: Oscar Nominee Skeletons in the Closet →
Scroll Up