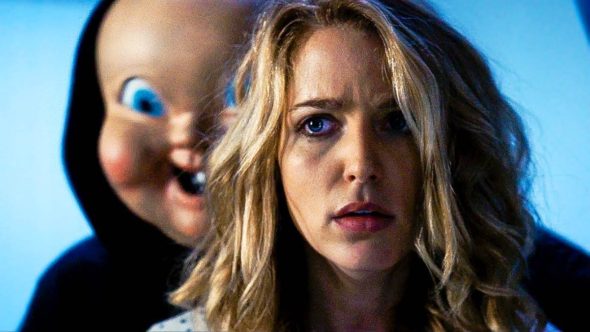 This was mainly thanks to Jessica Rothe, whose performance was funny enough to be simultaneously likable and detestable, and whose character arc mostly felt earned. (Bill Murray’s are big shoes to fill.)

Well, Rothe is back for a second helping of death day cake, as is Landon, who again writes and directs. Can the pair keep the story fresh for a sequel?

Why, no. Thanks for asking.

Where the original was a funny slasher with a SciFi bent, the sequel is a standard Eighties romcom with an occasionally morbid sense of humor. Think Real Genius, only dumber and more tedious.

Tree (Rothe) believes she’s broken free of her murderous time loop by killing the person who was out to kill her—and learning some hard-won life lessons in the meantime.

She was wrong, though, because the truth is that her boyfriend Carter’s (Israel Broussard) weird roommate Ryan (Phi Vu) has gotten all Timecrimes in the college lab and that’s what caused the loop. In fact, it’s causing another loop into a parallel dimension.

Everyone from the original is back and almost the same as last time (because this is a parallel universe). Any new character who is not white joins Ryan in the lab. Nerds – another sad Eighties theme that won’t stay dead.

Slapstick humor (Oh, this blind French thing is enough to make your brain bleed) and dumbfounding gaps in logic follow. A list of what does not follow: tension, horror, laughter.

Seriously, though, if you haven’t seen Nacho Vigalondo’s 2007 mindbender Timecrimes, you should definitely do that instead of going to HDD2U.

Oh! You know what else is great in that SciFi/time loop/horror neighborhood? The Endless.

The point is, if you are in the mood for some genre bending SciFi fun, you won’t find it here.