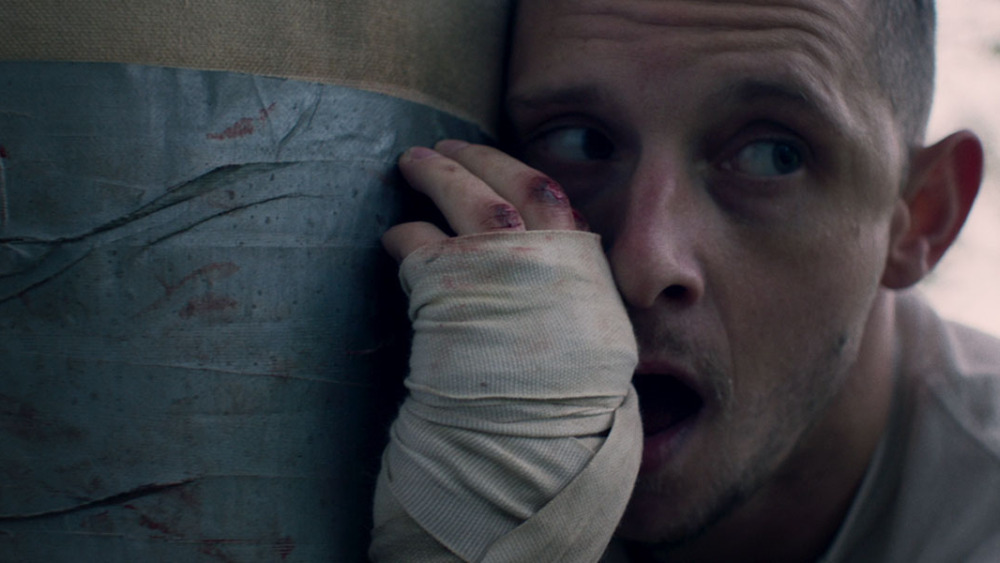 Go into Donnybrook expecting an action movie about bare knuckle fighting and you’re going to be sorely disappointed: there’s more road movie than Rocky. But director Tim Sutton’s dissection of American desperation is out to expose the underbelly of more than just backyard brawling.

Sutton adapts Frank Bill’s novel with unrelenting sparseness. The movie centers on the intertwined lives of Jarhead Earl (Jamie Bell) and Chainsaw and Delia Angus (Frank Grillo and Margaret Qualley) as they pursue the limited versions of the American dream available to them in rural, addiction-ravaged Ohio.

Earl wants to win the Donnybrook, a legendary underground fight whose winnings will allow him to give his family a better life. Delia just wants to sell a bunch of meth so she can escape dead-end life with her abusive brother. And Chainsaw Angus just wants all that meth back that his sister stole. (You know a situation is dire anytime someone steals drugs from a person named Chainsaw.)

Donnybrook is violent but not gratuitous. As the characters’ lives converge on the road to the fight, the flashes of violence that build toward the climax serve mostly as a reminder of the pervasive despair everyone is running away from.

Grillo plays Chainsaw Angus as a relentless force that blows right through anyone and everyone he comes in contact with—men, women and children alike. There’s more than a touch of Coens-meet-McCarthy to Sutton’s adaptation, and not just in Angus’s almost elemental pursuit.

Earl’s milieu echoes the Appalachian noir of Winter’s Bone, but with a contemporary urgency all its own. Unfortunately, the film’s singular devotion to its economically downtrodden message leads to some shortcuts for the characters.

Delia doesn’t get the space to expand beyond her tragic archetype, but the movie is at least an equal opportunity offender when it comes to dispensing with supporting stereotypes: James Badge Dale’s alcoholic cop could be removed entirely and the story wouldn’t miss a beat.

The degree to which Sutton’s languid, dream-like depictions of this world succeed in amounting to a whole greater than their parts will probably come down to how much you think we need another Fight Club-style examination of a narrow (and uniformly white) male anger.

Giving that perspective such lyric treatment is certainly a choice. Even when the blows don’t connect, there’s something to be said for action with ambition.