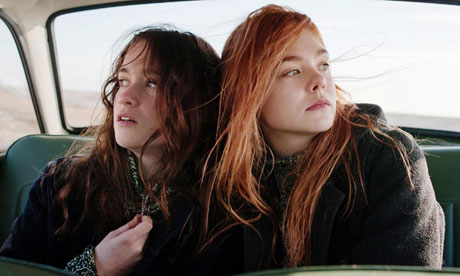 These days, there is an incredibly gifted group of young actors working in film – particularly  young female actors. Ginger & Rosa provides further proof that Elle Fanning belongs near the very top of this talented club.

At just fourteen years old (fifteen on April 9th), Fanning displays an astonishing level of emotional maturity, able to craft a window to her character’s soul, often without a single word. At this point, it is hard to imagine a limit to her potential.

In Ginger & Rosa, Fanning’s is just one of several strong performances in writer/director Sally Potter’s semi-autobiographical tale of a young girl battling fears of nuclear annihilation, and a growing crisis in her own family.

Set in 1960s London, the film shows Ginger (Fanning) and her best friend Rosa (Alice Englert) as nearly inseparable, testing parental boundaries and pondering their futures. Ginger, though, can’t shake her fears of nuclear war, and she grows increasingly anxious as the Cuban  missile crisis permeates the headlines.

When Ginger’s parents (Christina Hendricks and Alessandro Nivola, both stellar) separate, Ginger bounces between them as a situation arises that threatens both her family and her friendship with Rosa.

Potter displays a nuanced touch as she gently juxtaposes a coming of age story with the social, political and sexual upheaval of the time. Her film has an artful quality, as it makes quiet but powerful points on the effects of feeling helpless – in the world and right at home.

One thought on “A Crisis at Home and Abroad”