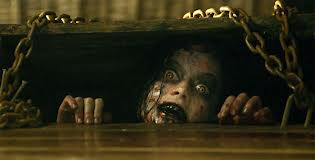 Back in ’the early 80s, a low budget horror flick called The Evil Dead got an unexpected boost from legendary author Stephen King. His  public endorsement thrust the obscure title into the spotlight, and on its way to cult status among horror fans. Evil Dead 2 followed in ’87, and then Army of Darkness in ’92. While the series grew increasingly campy, the original story of a deserted cabin, stupid kids and a certain book of the dead remains iconic.

It gets new life with Evil Dead, and fans that have been chomping at the bit will not be let down. The camp is long gone, replaced by solid writing and surprisingly steady direction. Oh, and blood, lots and lots of blood.

Director/co-writer Fede Alvarez, in his feature debut, isn’t concerned with Stooge-worthy splatter . His reboot lovingly reworks Sam Raimi’s tale, eliminating nearly all the humor but absolutely none of the bloodletting. Did I mention it’s bloody?

The film puts more backstory and character development in the mix, but the core remains. We find two couples and one sister holed up in an old cabin, but this time David (Shiloh Fernandez, a bit weak), his girlfriend and his buddies are there to help his sister Mia (Jane Levy, from TVs Suburgatory, in a fantastically gritty performance) quit her drug habit.

Though it’s impossible to pick out the contributions of each of the screenwriters updating Raimi’s script, certain elements – like this back story – scream of Diablo Cody (Juno, Young Adult, Jennifer’s Body), as an ingenious concept gives the film potential subtext by way of an unreliable narrator. Is this reality, or is Mia just insane and detoxing?

Solid writing and Alvarez’s gleefully indulgent direction allow the film – not only a remake, but a remake of a film that tread the overworn path of “cabin in the woods horror” – to remain shockingly fresh.  This is thanks in part to a handful of inspired tweaks, a couple fine performances, and a fearless but never contemptuous eye for carnage.

From the super-creepy opening sequence, Alverez’s update announces its fondness for the source material and his joyous aspiration to stretch that tale to its fullest, nastiest potential. He also shows a real skill for putting nail guns, machetes, hammers, electric meat slicers, hypodermics, even your standard bathroom mirror to fascinating new uses. Bloody, bloody uses.

It’s a quick,intense ride, but don’t be in a rush to leave the theater. For fans of the series, there’s a little gift at the end of the credits.

← A Crisis at Home and Abroad
So that happened: Wahoo Woes →
Scroll Up