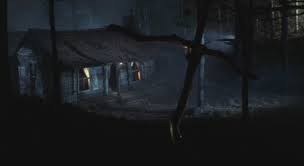 In honor of Evil Dead, we’re counting down our favorite “cabin in the woods” horror films that are not associated with that particular franchise.

5. Tucker & Dale Versus Evil (2010): This hilarious Shaun of the Dead-style send up of hillbilly horror entertains with every frame.

4. Resolution (2012): Self-aware, atmospheric and creepy, Resolution doesn’t rely on traditional slasher implements to get under your skin.

3. The Blair Witch Project (1999): There is, too, a cabin. At the very end, remember? After we lose Josh and Josh loses his tongue. Oh, you remember – Mike’s standing in the corner like a naughty child, and Heather…. poor, poor Heather…

1. The Cabin in the Woods (2011): Kind of a cross between Tucker & Dale and Resolution, this funny, wickedly clever, joyous deconstruction of horror tropes leaves you just giddy.