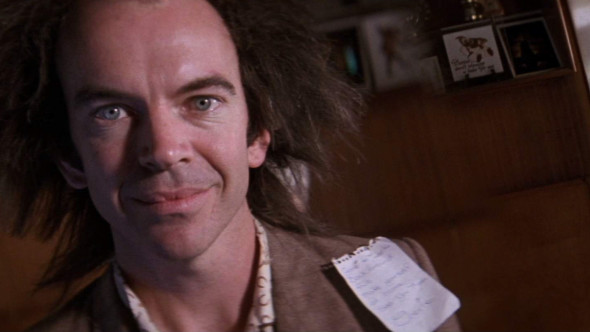 Horror films have the power to freak you out, to terrify you, to disturb and unsettle you. And often enough, along with inspiring some combination of the aforementioned emotions, certain horror films just beg the question WTF?! Like, almost anything Takashi Miike has ever directed. Or Antichrist – I’m sorry, did that fox just speak? Whether the bizarre puppetry of Hausu or the skull sex of Headless, the orifice’s point of view camera angles in Enter the Void or the queasying sibling relationship in Pin, horror movies can hit that unsettling nerve. So let’s just embrace it today, shall we? Today we count down the five (or six!) best in WTF?! horror.

Aside from an epically awful performance by Carlee Baker as the nosey teacher, the performances are more than just good for the genre, they’re disturbingly solid. McIntosh never veers from being intimidating, terrifying even when she’s chained. Bridgers has a weird way of taking a Will Ferrell character and imbibing him with the darkest hidden nature. Even young Zach Rand, as the sadist-in-training teen Brian, nails the role perfectly.

Andrzej Zulawski – writer/director/Czech – created this wild ride with doppelgangers, private investigators, ominous government agencies, and curious sexual appetites. It’s more precisely fantasy than horror, but it feels like David Cronenberg meets David Lynch, which is a pairing we can get behind.

Back at home, he greets his genuinely adorable son Bob (Michael Hogben). Bob – the names is so normal, and yet feels so unusual for a small child. Mark’s wife Anna (Isabelle Adjani) is also at home with Bob. There’s nothing normal about Anna.

Mark and Anna’s relationship boasts an intentional artificiality – a queasying sexuality – that makes it hard to root for either of them as their marriage deteriorates. Anna, it seems, is in love with someone else. Is it the sexually open – really, really open – Heinrich? Is it a bloody, mollusk-like monster? Is Mark boning Anna’s mean friend with a cast on her leg? Does Bob’s kindergarten teacher bear an unreasonable resemblance to Anna? Is anyone caring properly for Bob?

These questions and more go basically unanswered in a deviant, summary-defying, fantastical bit of filmmaking that mocks the idiocy, even insanity of obsession and boasts a handful of weirdly excellent performances. And sex with a bloody mollusk monster.

← How ‘Bout You?
Walking Disaster →
Scroll Up