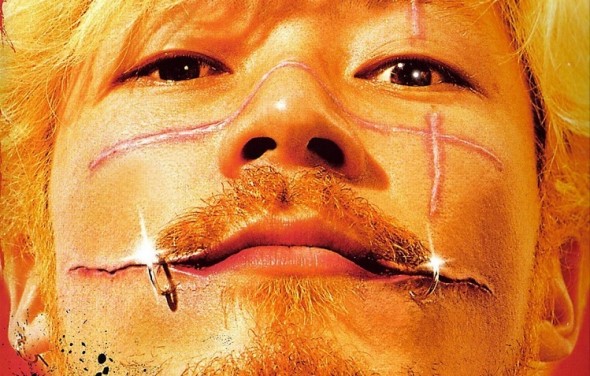 When we decided to start devoting entire podcasts to individual filmmakers, Takashi Miike was an obvious choice. He’s made 86 movies (and counting), so we knew it wouldn’t be too tough to find 5 really good ones. His imagination is like no other and his films push the envelope in terms of violence, subversive imagery, surreal storytelling, and violence. (Yes, we said that twice. He’s really, really good with violence.)

In fact, it was hard to narrow it down and even harder to leave some of his non-horror masterpieces, like 13 Assassins, off the list. Still, we did it. Here we give you Takashi Miike’s 5 best horror movies.

Miike directed one of the three shorts in this collection, a tidy little freakshow called “Box.”

Part of the reason it made this list is that the full film, including Fruit Chan’s “Dumplings” and the great Chan-wook Park’s “Cut,” is among the very best short compilation films you’ll find. Each short is so peculiar and original that your interest never wanes.

Miike’s component tells the story of a haunted, damaged woman. Her waking reality and dreams of the horror from her past weave together so that neither she nor the viewer is ever certain which is which. Sexual repression, incestuous undertones, dreamy colors, bodily contortions, and a dizzying, overlapping storyline mark this as a very Miike work.

Miike is an extremely prolific director. He makes a lot of musical films, a lot of kids’ movies, a lot of horror movies, and then this – a mashup of all of those things. Like Sound of Music with a tremendous body count.

Like a walk through somebody’s subconscious, the film is awash in repressed sexual desires of the very most insane and unspeakable. There’s a comical element that’s almost equally unsettling. Gozu is not as violent as many Miike films – it’s violent, don’t be mistaken, but the horror here is more in unseemly behavior and wildly inappropriate imagery.

Not everyone considers Ichi the Killer an outright horror film. IMDB classifies it as action/comedy/crime, and while it certainly contains all three of those elements, for sheer carnage, not to mention torture, we have to tack on the horror label as well.

Dubious henchmen with a secret weapon – a childlike perv they’ve programmed to kill at their bidding – start a yakuza war by throwing misleading information about the disappearance of one mob boss. He’s being tracked by his really, really, super loyal second in command, Kakihara. (That’s the guy with the incredibly cool/freaky split face from the DVD cover.)

The childlike Ichi misunderstands everything, and you long for his redemption and happiness, but Miike pulls that rug out from under you because, basically, every person in this film is seriously deranged.

Unwatchable and yet too compelling to turn away from, Audition is a remarkable piece of genre filmmaking. The slow moving picture builds anticipation, then dread, then full-on horror.

Miike punctuates the film midway with one of the most effective startles in modern horror, and then picks up pace, building grisly momentum toward a perversely uncomfortable climax. By the time Audition hits its ghastly conclusion, Miike and his exquisitely terrifying antagonist (Eihi Shina) have wrung the audience dry.