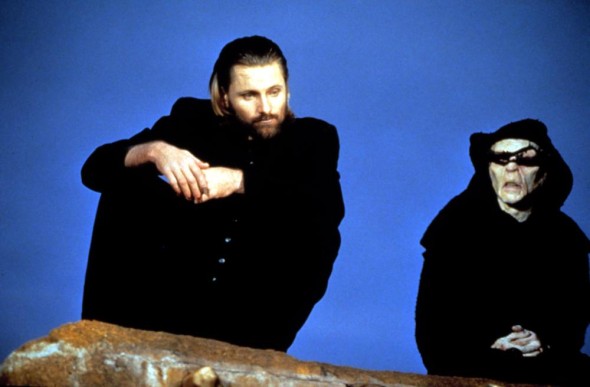 It is that time again – the time of year where the Academy of Motion Picture Arts and Sciences honors the best of the best, and we honor the worst of those best.

Yes, Skeletons in the Closet: Oscar Edition is back. It’s the day we dig around in Oscar nominee closets to find those low budget, horror bones hiding behind the fancier schmancier stuff.

And we can always find them. The great Viola Davis wasted her talent in the Rear Window/Fright Night knock-off Disturbia. The also-great Michael Shannon spent some time early in his career in the actually quite decent Dead Birds, while Ryan Gosling co-starred in the intriguingly titled Frankenstein and Me. Meanwhile, Octavia Spencer slummed it up in Pulse.

But there’s worse – and yet, somehow better – material to discuss. Here are our favorite not-good horror hiding in these A-listers’ closets.

Denzel! Just a year after the serial Oscar nominee and winner made the dark action thriller Fallen – not good, but not bad – he returned to the land of CSI with The Bone Collector. Must’ve had an itch to scratch.

The film is bland, Noyce never able to focus on a physically immobile hero and still create an exciting pace. And yet, Washington commands your attention no matter how listless the scene or unlikely the rest of the casting.

It’s been 20 years since Michael Myers escaped his confines and slaughtered all those people in Haddonfield. Thousands of miles away in a private school in Northern California, Laurie Strode and her brother come face to face again.

Who was excited? Back in 1998, we were. Jamie Lee Curtis was back, and we were allowed to forget Halloweens 3 – 6 ever happened. Plus – though he’s no John Carpenter – director Steve Minor does have a history with horror, and Curtis’s iconic mom Janet Leigh popped by.

The result was slick, and boasted a great deal more talent than the others: Alan Arkin, Joseph Gordon-Levitt and 2017 Oscar nom Michelle Williams. The 4-time Oscar nominee was saddled with the one-dimensional sweetheart role, and though you’d never have known she’d one day be among the most talented performers in film, you knew she was too good for this movie.

In 1988, co-writer/director George Sluizer unleashed a daring, meticulous and devastating film on an unsuspecting world. Spoorloos asked you to follow a grieving boyfriend down a rabbit hole – one with no escape.

Worse still, the fantasy itself is gutted with an “America’s not ready for the real thing” ending that just makes you want to kick a guy. Infuriating!

This is one of those bad movies that is fun to watch. Somehow the unusually talent-stacked cast doesn’t feel wasted as much as it does weirdly placed.

There is no question this film belongs to Christopher Walken – as do all films in which he graces the screen. His natural weirdness and uncanny comic timing make the film more memorable than it deserves to be, but when it comes to sinister, Oscar nominee Viggo Mortensen cuts quite a figure as Lucifer.

Unseemly, gorgeous and evil, he seethes through his few scenes and leaves the celluloid scorched.

Writer/director Steve Carpenter – auteur behind such classics as The Dorm that Dripped Blood – somehow convinced talent to join this cast. Who? A post-American Beauty Wes Bentley, an established Luke Wilson, and pre-Oscar nominee Casey Affleck.

Affleck stars as the tragically dead (or is he?) boyfriend of Cassie (Melissa Sagemiller) an awkward runner. (Yes, it’s tangential to any reasonable conversation about the film, but she runs in nearly every scene and I have never seen a more awkward runner.)

Still, Affleck is somehow not terrible.

← Strangers on a Trainwreck
Let Some Light In →
Scroll Up