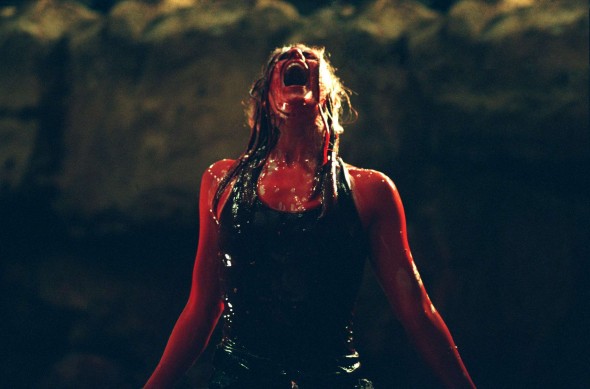 Horror’s come a long way from the days of nubile, sexually wayward teenage girls being victimized and/or rescued by men. Strong female characters have become staples of the genre, thanks in part to a rise in female writers and directors, but likely just as much credit goes to an audience unwilling to accept ridiculous stereotypes. Today we are joined by Senior Feminist Correspondent Melissa Starker as we pay tribute to half dozen of the best feminism horror has to offer.

This spelunking adventure comes with a familiar cast of characters: arrogant authority figure, maverick, emotionally scarred question mark, bickering siblings, and a sad-sack tag along. And yet, somehow, the interaction among them feels surprisingly authentic, and not just because each is cast as a woman.

In horror movies, things don’t always go so well for the ladies. But sometimes we’ll surprise you, and your pervy freak of a son, as director Lucky McKee details in his most surefooted picture, the gender role horror show The Woman.

The film rethinks family – well, patriarchy, anyway. Writer Jack Ketchum may say things you don’t want to hear, but he says them well. McKee has no qualms about showing you things you don’t want to see. Like most of Ketchum’s work, The Woman is lurid and more than a bit disturbing. Still, nothing happens in this film by accident – not even the innocent seeming baking of cookies – nor does it ever happen solely to titillate.

Ginger Snaps picks at most of the same adolescent scabs as Carrie – there’s the underlying mania about the onslaught of womanhood accompanied by the monsterization of the female, which leads to a mounting body count.

Ginger (Katharine Isabelle) and her sister Bridget (Emily Perkins), outcasts in the wasteland of Canadian suburbia, cling to each other, and reject/loathe high school (a feeling that high school in general returns). On the evening of Ginger’s first period, she’s bitten by a werewolf. Writer Karen Walton cares not for subtlety: the curse, get it? It turns out, lycanthropy makes for a pretty vivid metaphor for puberty. It also proves especially provocative and appropriate for a film that upends many mainstay female cliches.

Walton’s wickedly humorous script stays in your face with metaphors, successfully building an entire film on clever turns of phrase, puns, and analogies, stirring up the kind of hysteria that surrounds puberty, sex, reputations, body hair, and one’s own helplessness to these very elements. It’s as insightful a high school horror film as you’ll find, peppered equally with dark humor and gore.

Ridley Scott made a lot of great decisions with this film – the pacing, the look, the monster, and the casting. Especially the casting. Because the Ripley characgter was not specified on the page as a female – no character was – but Scott decided that a couple of these crewfolk would certainly be women by this point in human history. And history was made.

Ellen Ripley is just the next in charge. She’s just a solid, smart, savvy crewman. That’s what makes the film so special. In Aliens – an all around outstanding film – Ripley is out to save a little girl. She draws on her maternal instinct, which is a far more traditional and comforting reason for audiences to accept a female behaving this way. But in Alien, her gender really is not an issue. She happens to be the strongest, most ass kicking survivor on board.

A weary single mother contending with her young son’s erratic, sometimes violent behavior begins to believe that her son’s imaginary boogeyman may well be a monstrous presence in her house.

Writer/director Jennifer Kent’s film is expertly written and beautifully acted, boasting unnerving performances from not only a stellar lead in Essie Davis, but also the alarmingly spot-on young Noah Wiseman. Davis’s lovely, loving Amelia is so recognizably wearied by her only child’s erratic, sometimes violent behavior that you cannot help but pity her, and sometimes fear for her, and other times fear her.

Jonathan Demme did the impossible. He took the story of a flesh eater who helps the FBI track down a flesh wearer and turned it into an Oscar magnet. How did he do it? With muted tones, an understated score, a visual focus on the characters rather than their actions, and a subtle but powerful use of the camera. The performances didn’t hurt, either.

Yes, it’s awesome, but how is it feminist? Mainly, through Jodie Foster’s character of Clarice Starling – our point of view character and the film’s hero. We are meant to identify with and root for this fledgling FBI agent as she navigates the horrifying mind of Dr. Hannibal Lecter (an epic Anthony Hopkins) in the hopes of stopping a serial killer (the under appreciated Ted Levin).

Usually, a director shoots a villain from below, making him look larger and more menacing. (It’s also not a very flattering angle, which doesn’t hurt when you’re trying to make someone seem mean.) The victim is usually shot from above, which makes them seem smaller, less powerful, more vulnerable, and cuter. When Starling and Lecter are talking in the prison, they’re shot at the same angle, eliminating that power struggle. They’re shot as equals. In this way the film as a whole affords Starling all the respect and credibility the character proves to deserve.

Thanks to Senior Feminist Correspondent Melissa Starker for joining us today! Listen to the whole conversation on our podcast FRIGHT CLUB.

← Punch Drunk
Tale From the Dark Side →
Scroll Up