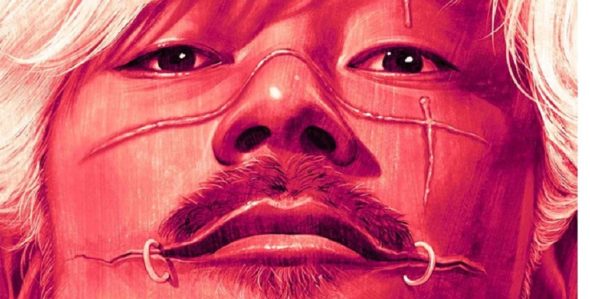 We want to thank Cati Glidewell, also know as The Blonde in Front, for joining us to talk through some of the best blond(e)s in horror. There’s a lot of names here, but I think we may have proved that—with a few really bloody exceptions—blondes do seem to have more fun in these movies.

Tom Noonan’s entire career is defined by a mixture of tenderness and menace. It begins with his unusual physical appearance, including his almost colorless locks, and ends with performances that realize everything broken and horrifying about a character—especially Francis Dollarhyde. The terrifying chemistry between Dollarhyde and a blind Joan Allen’s is heartbreaking perfection.

Like Norman Bates across the pond, England’s Mark Lewis (Carl Boehm) is an innocent. Boehm’s blank stare, his frightened mouse reflexes, his blond locks all contribute to a character so tender you can’t help but root for him—although it would be great if he’d stop murdering women.

A bleach blond in a Japanese film will automatically draw the eye, but Kakihara’s not just here to catch your attention. Genius filmmaker Takashi Miike and Tadanobu Asano created this badass to upend your expectations. He’s the baddie, right? And man-child Ichi is the innocent? Or is Miike toying with you?

Get the Kleenex ready because the ridiculously cute Mike Hughs has a date with a semi. A toddler when he filmed this movie, Hughs really turns in a remarkable performance, whether he’s tugging your heart strings or slicing through Fred Gwynne’s Achilles tendon.

Hubba hubba. The rock star duds. The homoerotic relationship with Jason Patrick. The mullett! Keiffer Sutherland’s bad boy David was so cool you couldn’t help wanting to hang out with him. Eating maggots seems like a small price to pay, really. Nobody said the cool kids’ table would be tasty.

There are those with a thing for bad boys, and then there are those with a thing for Rutger Hauer. He’s not a bad boy—he’s not even in the same zip code. His John Ryder will make you feel all kinds of weird things because he’s not your garden variety dangerous character. What he will do to you, to that nice family in the station wagon, to your new girlfriend, is more awful than anything you can think of.

When De Palma launched the ultimate in mean girl cinema, Nancy Allen delivered the ultimate mean girl. Chris Hargeson’s bloodthirsty princess energy has to convey something horrifying if she is to properly offset what poor Carrie White has to content with at home. Luckily for us (not so much for Carrie), she does.

Watching The Witch, you realize that writer/director Robert Eggers chose everything: every sound, every image, every color. And while Tomasin’s family looked like gaunt, hard working, colorless cogs in God’s wilderness wheel, Thomasin did not. Even as we open on Anya Taylor Joy, confessing her sins and begging forgiveness, she is lit from within. A beacon. It’s just that her light has caught the wrong kind of attention.

The genius Wes Craven and his producer Drew Barrymore pulled an incredible and soon-to-be endlessly copied sleight of hand with Casey—the spunky female played by the biggest star in the cast. With this character, Craven introduces the meta-movie-commentary that defines this film while simultaneously upending our own unconscious investment in those tropes by killing Casey off in Act 1.

We went back and forth. Would it be Deneuve as gorgeous seductress Miriam in Tony Scott’s 1983 vampire film The Hunger, or innocent driven to madness Carol in Polanski’s Repulsion? (He does know how to torture innocent young women, doesn’t he?) Deneuve’s performance in Repulsion is so compelling and difficult—playing primarily alone for about half the film—that it won out, but either way, she’s a blonde to be reckoned with.

The OG Karen (to steal a phrase from this episode’s co-host The Blonde in Front), Pamela Voorhees has a plan and she’s sticking to it. This funny business among the camp counselors needs to be addressed, corrected. Enough is enough. Betsy Palmer’s performance is spot-on, so comforting and in control before it goes completely batshit. Jason may get all the love, but Mrs. Voorhees took care of business first.

Like his idol Hitchcock, Brian De Palma had a thing about blondes—what that fair hair represented, what it could mean. For De Palma, it might be the bombshell of Angie Dickson’s character in Dressed to Kill, or the innocence of Carrie White. Of course, Sissy Spacek’s Oscar nominated performance in the film was what really sold this sheltered, shell-shocked little lamb, but you can’t deny she had that look.