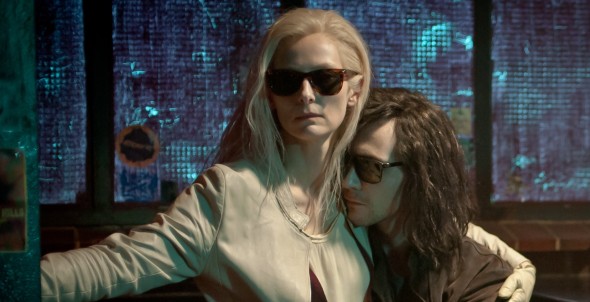 An aching loneliness tends to be the overwhelming theme of any vampire film that focuses primarily on the female predator – unless, of course, the focus is girl-on-girl action. But even then, aching loneliness, too. Whether evil bloodsuckers or just tragic and doomed to feed off the living, there’s something peculiarly spooky about these ladies. Here we celebrate the vampiress with our countdown of the five(ish) best female vampire movies.

Listen to the podcast, complete with a live studio audience, HERE.

Countess Bathory – history’s female version of Dracula – checks into an all-but-abandoned seaside hotel. The only other guests, besides the Countess’s lover, Ilona, is a honeymooning couple.

Effortlessly aristocratic, Delphine Seyrig brings a tender coyness, a sadness to the infamous role of Bathory. Seyrig’s performance lends the villain a tragic loveliness that makes her the most endearing figure in the film. Everybody else feels mildly unpleasant, a sinister bunch who seem to be hiding things. The husband, in particular, is a suspicious figure, and a bit peculiar. Kind of a dick, really – and Bathory, for one, has no time for dicks.
Caring less for the victims than for the predator – not because she’s innocent or good, but because her weary elegance makes her seem vulnerable – gives the film a nice added dimension.

Leave it to visionary writer/director Jim Jarmusch to concoct a delicious black comedy, oozing with sharp wit and hipster attitude.

Great lead performances don’t hurt, either, and Jarmusch gets them from Tom Hilddleston and Tilda Swinton as Adam and Eve (perfect!), a vampire couple rekindling their centuries-old romance against the picturesque backdrop of…Detroit.

Not since the David Bowie/Catherine Deneuve pairing in The Hunger has there been such perfectly vampiric casting. Swinton and Hiddleston, already two of the most consistently excellent actors around, deliver cooly detached, underplayed performances, wearing the world- weariness of their characters in uniquely contrasting ways.

There is substance to accent all the style. The film moseys toward its perfect finale, casually waxing Goth philosophic about soul mates and finding your joy.

Let’s be honest, we’ve combined these two films just to make room for an additional film in the countdown. In 2008, Sweden’s Let the Right One In emerged as an original, stylish thriller – and the best vampire flicks in years. A spooky coming of age tale populated by outcasts in the bleakest, coldest imaginable environment, the film breaks hearts and bleeds victims in equal measure. Kare Hedebrant‘s Oskar with a blond Prince Valiant cut falls innocently for the odd new girl (an outstanding Lina Leandersson) in his shabby apartment complex. Reluctantly, she returns his admiration, and a sweet and bloody romance buds.

Hollywood’s 2010 version is the less confusingly entitled Let Me In. Director Matt Reeves (Cloverfield) managed to retain the spirit of the source material, while finding ways to leave his own mark on the compelling story of an unlikely friendship.

While the original had an ominous sense of dread, a feel of bleak isolation, and a brazen androgyny that the update can’t touch, Let Me In scores points all its own. Reeves, also adapting the screenplay, ups the ante on the gore, and provides more action, scares and overall shock value.