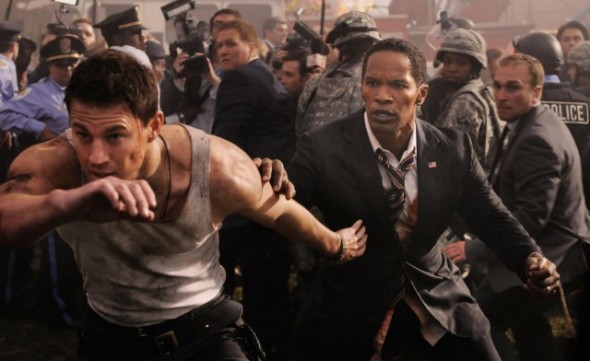 Well, I believe I owe Olympus Has Fallen an apology.

Just a few months back, I labeled that film a pandering, if strangely entertaining, Die Hard in the White House.

Little did I know that White House Down was lurking like a crazy uncle waiting to show how much louder his bitchin’ Camaro is than your puny ride. This new presidential ass-kicking fest proudly lives by a bigger, louder, faster mentality, uncorking more of everything – the pandering, the wisecracks, the unapologetic Die Hardiness.

Channing Tatum dons the dirty wife-beater as John Cale, a D.C. cop on a White House tour with his young daughter when a paramilitary group invades. Naturally, John has been denied a spot on the Secret Service detail of President James Sawyer (Jamie Foxx) that very afternoon, which adds a redemptive angle to John’s heroics that the film wears like a manipulative badge of honor.

John and the Prez fight the baddies through every room, hallway and secret Marilyn Monroe love tunnel (patent pending) in the White House, recreating as many Die Hard moments as they can. Shoes off? Elevator shaft? Loved one held hostage? Cops mistakenly shooting at our hero on the roof?  Oh, yes, all that and so much more, as clever one liners give way to all-out comedy routines while bullets fly and rockets launch.

And yet somehow, the unabashed ridiculousness and likable performances wear you down, and the over two hour assault on your objections calls to mind Russell Crowe in Gladiator.

“Are You Not Entertained?”

← Have I Seen You Somewhere Before?
Elijah Wood in Leg Warmers? →
Scroll Up