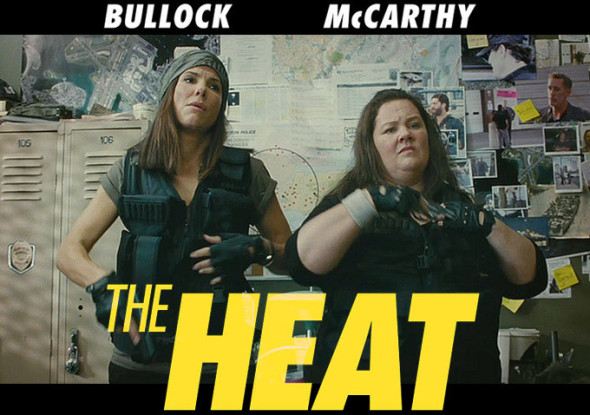 It’s interesting how a film can be so familiar and so unusual at the same time. Take The Heat. Pairing an A-list movie star with a proven comic talent for a buddy cop comedy is hardly a fresh idea. 48 Hours, Rush Hour, The Other Guys – it’s been done, and it doesn’t always work. Still, it is a well-worn concept that often delivers enough laughs to merit a couple of hours.

Now, thanks mostly to the deserved popularity of Bridesmaids, it has finally occurred to someone in Hollywood that women can shoulder an R-rated comedy. So, bro-mance is not a requirement for this odd couple caper, in which both cops are women – specifically,  Sandra Bullock and Melissa McCarthy.

Bullock is the uptight Ashburn to McCarthy’s loose cannon Mullins, the Felix to her Oscar, the Danny Glover to her Mel Gibson. They’ve been paired against their wills to ferret out a Boston drug lord. Maybe they’ll exploit each other’s foibles in the process, maybe even find an unexpected friend. (I’ll give them this – at no time does either detective say she is getting too old for this shit.)

The two leads fill the requisite roles quite well, Bullock’s angular, anal-retentive is the perfect foil for McCarthy’s unkempt profanity volcano. Bullock keeps pace admirably, but McCarthy is such an inexhaustible comedy explosion that the rest of the cast doesn’t have to work too hard. Her every line feels improvised, giving Katie Dippold’s otherwise predictable script much needed vitality.

McCarthy’s riotous performance honestly outshines everything about a film that’s content to coast on the novelty of female casting. Nothing else about The Heat bears remark – clichéd comedy trappings familiarly staged and directed, with Sandra Bullock relying on her Miss Congeniality stylings. It’s not terrible, but certainly nothing to write home about.

But there is nothing stale about McCarthy. Her talent for physical gags, her impeccable timing, and her bottomless well of one-liners gives every scene, however tired, the opportunity for a laugh.