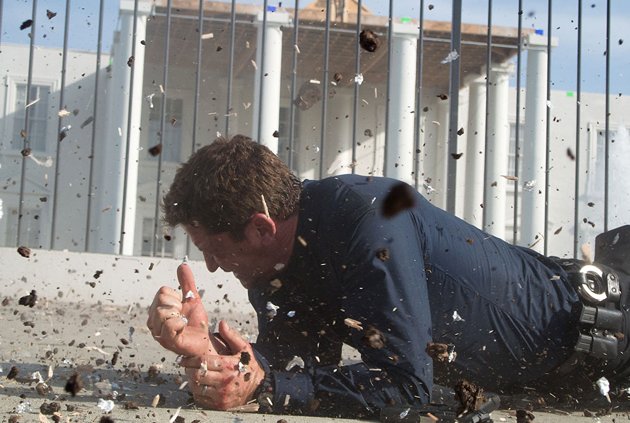 Borrowing the original Die Hard formula is not a heinous crime. Films have been doing it for years, with varying degrees of success.

Olympus Has Fallen takes that formula, as well as..ahem.. a scene or two, wraps it in pathos and patriotism and delivers an action flick that really has no business working as well as it does.

The “Nakatomi Plaza” this time round is none other than the White House, which is overtaken by a gang of North Korean terrorists who were apparently unmoved by the all-American charm of Dennis Rodman.

The fly in their ointment is ex special forces/ex secret service/general badass Mike Banning (Gerard Butler), who slipped inside during the takeover and is determined to deliver a few good wisecracks while rescuing the hostages, which include the President (Aaron Eckhart),  VP and Secretary of Defense.

Director Antoine Fuqua (Training Day) has a clear vision of the movie he’s making and sticks to it, with no apologies. That vision is basically 90 minutes of the “get off my plane!” crowd-pleasing from Air Force One. The action,  well paced as it is, is interspersed with dramatic shots of bullet-ridden flags falling in slow motion and a heavy-hearted Speaker of the House/acting President (Morgan Freeman of course) debating his next move.  The film offers up a couple shots at American foreign policy, but those are quickly drowned out by the swelling music and nationalistic bombast.

The ensemble cast (including Ashley Judd, Melissa Leo, Dylan McDermott and Angela Bassett) does come through for Fuqua, helping him deliver a few tense-if-ridiculous moments.

Olympus Has Fallen aims no higher than keeping an audience engaged throughout a large drink and popcorn. Though that target is squarely acquired, it’s a rather empty victory that is easily forgotten once the lights come up.