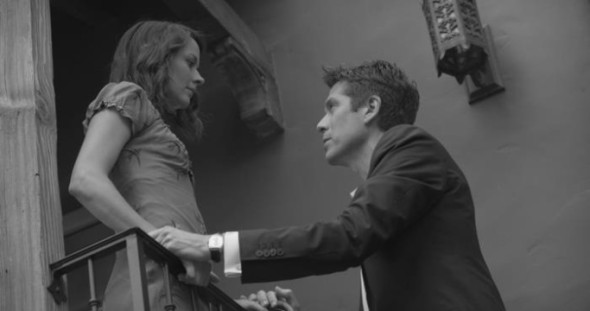 Okay, so Joss Whedon can write and/or direct TV shows, animated classics, horror homages, superhero blockbusters, you name it. Wouldn’t it be funny if he took a stab at Shakespeare?

It is funny, and thoroughly entertaining.

With Much Ado About Nothing, Whedon again shows his storytelling instincts are dead on, regardless of the genre. Shakespeare’s classic comedy about love and deception is given a present-day makeover, employing a game cast of Whedon favorites to create a playful, satisfying romp.

Bringing the bard into a modern setting can be tricky, whether on stage or screen, and admittedly, it does take a few minutes to get used to hearing “by my troth” being bandied about a stylish kitchen. Hang in, and it won’t take long for you to fall for Whedon’s ensemble.

The wordplay is frenetic, some of the most clever Shakespeare produced, but there are also very funny stretches that rely heavily on physical comedy. The cast delivers with a gleeful enthusiasm, and Whedon adds amusing touches such as having one pivotal scene set amid snorkeling, giving it a new, Wes Anderson-esque hilarity.

Amy Acker (TV’s Angel, The Cabin in the Woods) and Alexis Denisof (Angel/The Avengers) shine as the adversarial would-be lovers Beatrice and Benedict, while Nathan Fillion (Serenity) nearly steals the movie as the easily offended inspector Dogberry. These actors, like nearly all in the cast, have a history with Whedon, and the mutual comfort level gives the entire adaptation a breezy, confident feel.

Turns out, Shakespeare fits Whedon about as well as Thor’s hammer or Sheriff Woody’s boots.