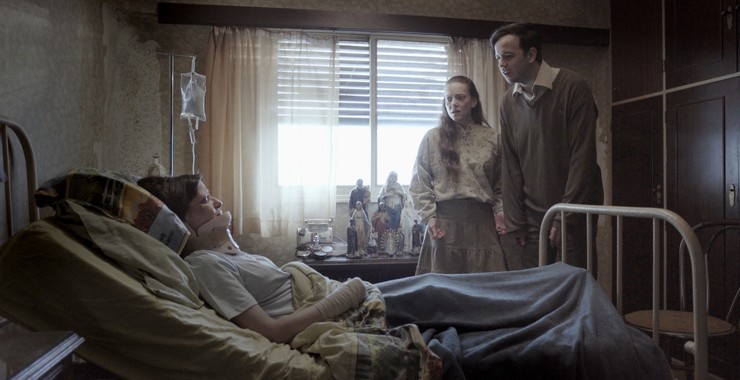 Three characters, and one big house. That’s all that directors/writers Martin Blousson and Macarena Garcia Lenzi need to conjur up a good bit of creepy in Rock, Paper and Scissors (Piedra, papel y tijera).

Jesus (Pablo Sigal) and Maria Jose (Augustina Cervino) are isolated siblings living alone in the family home after the recent death of their father. When their paternal half-sister Magdalena (Valeria Giorcelli) arrives from Spain to discuss the inheritance and plans for the house, Jesus and Maria offer to put her up for the length of her stay.

Magdalena doesn’t want to trouble them for any more than one night, but a nasty fall down the stairs the next morning means little sister isn’t going anywhere.

Suddenly, Magdalena is a captive, and at the mercy of her siblings’ eyebrow-raising eccentricities. Jesus is an aspiring filmmaker filled with questionable inspirations, and Maria is a Wizard Of Oz-obsessed nursemaid who hopes to co-star with a guinea pig named Toto in Jesus’s upcoming film.

Magdalena’s only hope for escape seems to be separating her brother and sister, and probing for ways to work one against the other. Could Maria have pushed Magdalena down the stairs, or is Jesus the real danger in this house? And how did their father really die, anyway?

Blousson and Lenzi move past the Misery-like premise in short order, piling on some surrealistic Lynch-meets-Lanthimos weirdness and bathing it all in a stylistic visual pastiche of earth tone Goth.

The trio of actors reveals their characters’ true motivations at a languid pace that keeps us guessing, right up to the gorgeous closing shot that will leave you looking twice. Maybe three times.