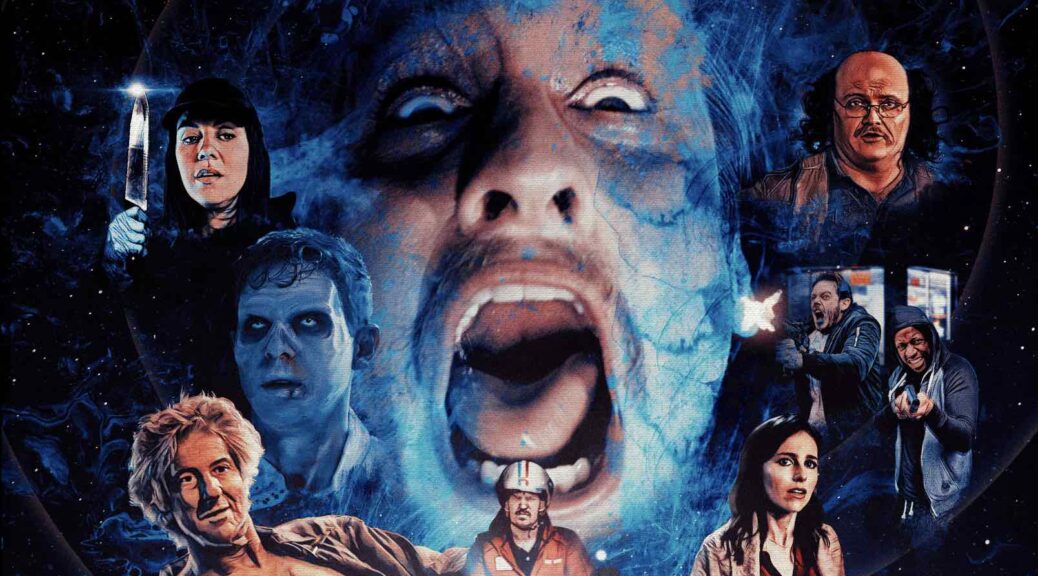 Colloquialisms being taken to their absolute extremes. A woman struggling to find happiness in solitude. A pleasure-deprived man seeking help from his friends. Body horror ending not in goo and grue, but in dad jokes?!? Tiny Cinema is a comedic genre anthology film that wants to make you laugh and gasp in equal measure with the outrageous storytelling that it contains within. Does it succeed? Mostly.

Tiny Cinema is the latest cinematic endeavor of director/writer/actor extraordinaire Tyler Cornack and his motley crew of performers. If you’ve seen their previous effort, Butt Boy, you’re going to spot a lot of familiar faces across all six segments here. This film largely lacks that one’s Henenlotter-esque weirdness, however. It instead opts for a modern Twilight Zone vibe; offering up situations where ordinary people find their lives turned upside down by strange occurrences that are either tied to everyday problems (i.e. loneliness, sexual dysfunction, dating) or become twisted takes on everyday sayings (i.e. “That’s what she said!” and “Yo momma!”).

The results are mixed. On the positive side of things, there is a great host in the form of the quirky and deeply charismatic Paul Ford. The first three segments are also really entertaining (particularly “Bust!”). Furthermore, what really helps Tiny Cinema along is its cast. The troupe that Cornack has pooled together are all beyond game for whatever delirious nonsense he asks of them and that helps smooth over even the segments that don’t really work. They help to drive his best ideas home and make his films worth seeking out.

It’s in the back half where things begin to wobble, as the other three segments aren’t nearly as strong. Almost all anthology films have weak spots. Unevenness is par for the course with episodic storytelling. The weaker segments here are the slighter ones that just aim for shock value. Unfortunately, with them all filling out the second half of the feature, it means that it starts with a bang and ends with a bit of a whimper.

Tiny Cinema might be a step down from Butt Boy, but it’s a solid indie slice of portmanteau moviemaking. If you’re game for some weird fun, this might just be up your alley.