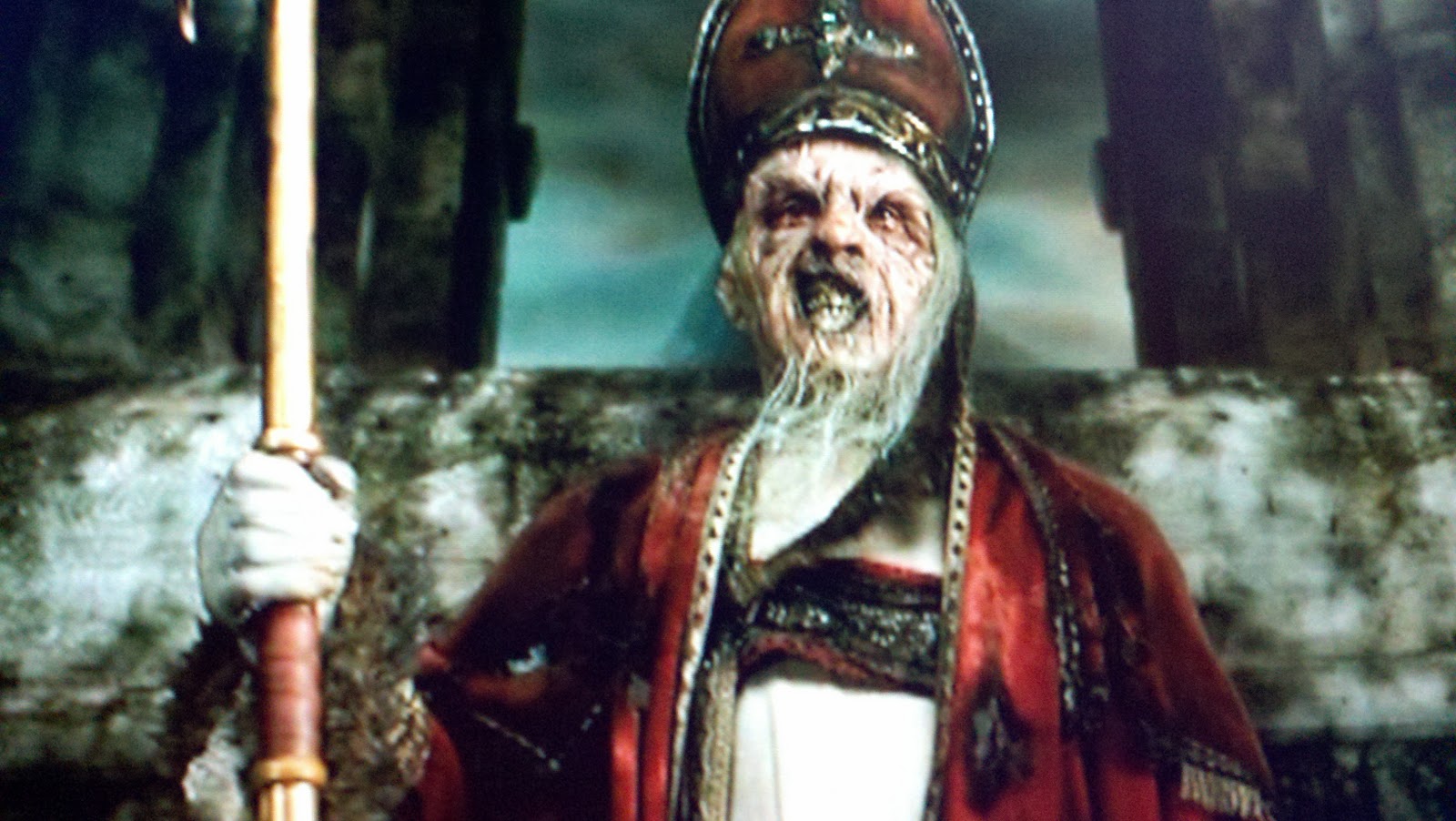 It’s the holidays!! Who doesn’t want to snuggle in with their cup of nog and a nice, Christmassy bloodletting? I know we do. But with so very much to choose from – Krampus, A Christmas Horror Story, Silent Night, Deadly Night, Santa Claws, Gremlins, The Nightmare Before Christmas, The Legend of Hell House, The Children, Satan’s Little Helper, Santa’s Slay – which should you watch?

Well, none of those. I mean, they’re great in their own (sometimes awful) ways, but we have a list of 5 that may actually scare you.

What is every child’s immediate reaction upon first meeting Santa? Terror. Now imagine a mash-up between Santa, a pirate, and an old school Catholic bishop. How scary is that?

Well, that’s basically what the Dutch have to live with, as their Sinterklaas, along with his helper Black Peter, sails in yearly to deliver toys and bag naughty children to kidnap to Spain. I’m not making this up. This truly is their Christmas fairy tale. So, really, how hard was it for writer/director Dick Maas to mine his native holiday traditions for a horror flick?

Allegorical of the generations-old abuse against children quieted by the Catholic Church, Saint manages to hit a few nerves without losing its focus on simple, gory storytelling.

Director Bob Clark made two Christmas-themed films in his erratic career. His 1940s era A Christmas Story has become a holiday tradition for many families and most cable channels, but we celebrate a darker yule tide tale: Black Christmas.

Why the girls remain in the sorority house (if only they’d had an Official Red Ryder Carbine-Action Two-Hundred-Shot Range Model Air Rifle!), or why campus police are so baffled remains a mystery, but Clark was onto something with the phone calls, as evidenced by the number of films that ripped off this original convention.

How fucked up is this one? The fantastic Vincent Cassel stars as the weirdest handyman ever, spending a decadent Christmas weekend with a rag tag assortment of nightclub refugees. After Bart (Olivier Barthelemy) is tossed from the club, his mates and the girls they’re flirting with head out to spend the weekend at Eve’s (a not shy Rosane Mesquida). Way out in rural France, they meet Eve’s handyman, his very pregnant wife, and a village full of borderline freaks.

The film is savagely uncomfortable and refreshingly unusual. Cassel’s performance is a work of lunatic genius, and his film is never less than memorable.

It’s not just the Dutch with a sketchy relationship with Santa. That same year Saint was released, the Fins put out an even better Christmas treat, one that sees Santa as a bloodthirsty giant imprisoned in Korvatunturi mountains centuries ago.

Some quick thinking reindeer farmers living in the land of the original Santa Claus are able to separate naughty from nice and make good use of Santa’s helpers. There are outstanding shots of wonderment, brilliantly subverted by director Jalmari Helander, with much aid from his chubby cheeked lead, a wonderful Onni Tommila.

Rare Exports is an incredibly well put together film. Yes, the story is original and the acting truly is wonderful, but the cinematography, sound design, art direction and editing are top notch.

Who didn’t know this would be our #1?

This is not your usual Christmas cheer – not even for this list. No, this is a horror movie, no question about it, and it stems from the country that put out some of the most extreme yet excellent the genre had to offer in the first decade of this century. France’s 2000 – 2010 output included High Tension, Frontiers, Martyrs, Sheitan, Calvaire, Them, Irreversible, and Trouble Every Day, all of which are spectacular and challenging horror options. Inisde stands out for its exponentially developing pace, its sinister sense of humor, and one outstanding villain.

Beatrice Dalle’s insidious performance is hard to shake. Fearless, predatory, pitiless and able to take an enormous amount of abuse, her nameless character stalks a very, very pregnant Sarah (Alysson Paradis). Sarah lost her husband in a car crash some months back, and now, on the eve of Christmas, she sits, enormous, uncomfortable, and melancholy about the whole business. She’s grown cynical and despondent, more depressed than excited about giving birth in the morning.

Alexandre Bustillo’s film seeks to change her mind, make her want that baby. Because Dalle’s lurking menace certainly wants it. Her black clad silhouette is in the back yard, smoking and stalking – and she has seriously bad plans in mind.

This is a mostly brilliant effort, a study in tension wherein one woman will do whatever it takes, with whatever utensils are available, to get at the baby still firmly inside another woman’s body.

Listen to the whole podcast here.