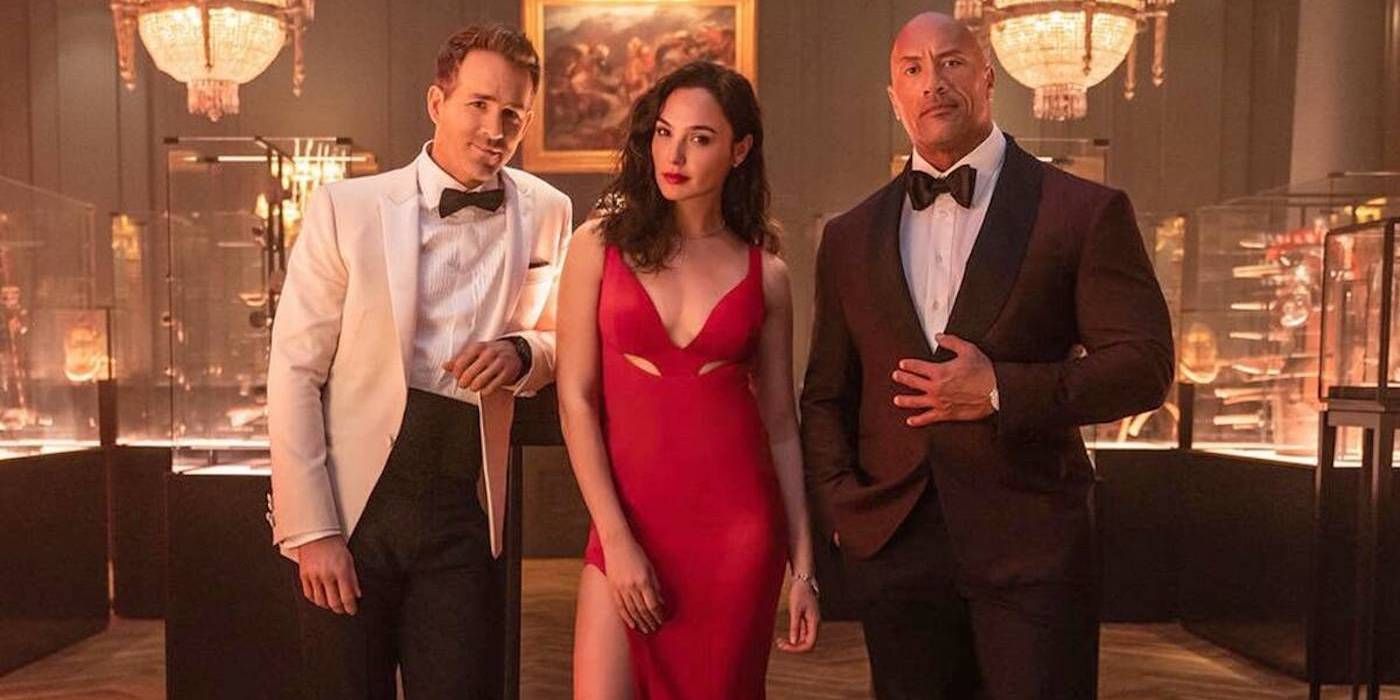 Plus Dwayne Johnson and Ryan Reynolds.

I said I’m in! Sounds like a bunch of fun.

But somehow, it’s just not.

Johnson is FBI agent John Hartley, and he’s on the trail of Nolan Booth (Reynolds), the 2nd most wanted art thief in the world.

Who’s number 1? That would be The Bishop (Gadot), a mysterious criminal who always seems one step ahead of Booth in the quest to reunite three priceless jeweled eggs that Marc Antony once gave to Cleopatra. Yes, Cleopatra.

After a snappy, parkour-heavy chase to open the film, Hartley offers Booth the chance to move up to the top spot on Interpol’s Red Notice (highest level arrest warrant) list. All he has to do is help Hartley and the Feds nab The Bishop.

And the game is on!

Writer/director Rawson Marshall Thurber (Dodgeball, We’re the Millers, Central Intelligence, Skyscraper) has assembled three charismatic A-listers for a globe-trotting adventure with glamourous locales, double crosses and a script full of quippy banter. And it takes barely thirty minutes to begin wondering how it all went wrong.

You would think that watching Gadot, Reynolds and Johnson do anything together would be at least a marginal hoot, but nobody seems comfortable. What chemistry there is feels forced, at best, and none of the three stars bring much beyond the personas they’ve earned in better films. Reynolds carries most of the comedic weight, but with schtick that’s nearly interchangeable from his two Hitman’s Bodyguard films, a stale odor appears early and often.

There are a few LOL moments, most notably Hartley and Booth arguing about Jurassic Park and the real Ed Sheeran showing up to fight some federal agents. But with direct references that include Indiana Jones and Vin Diesel, plus multiple outlandish wardrobe changes (Johnson can’t exactly buy off the rack, so who had the tailor made safari outfit?), Thurber ends up navigating an awkward space that teeters on spoof.

Is Red Notice really trying to launch a new action/comedy franchise? Or is it just riffing on the genre? Either way, it ends up on the naughty list. Even those two Hitman‘s Bodyguard films embrace their own ridiculousness to deliver some dumb, forgettable fun. Red Notice manages two out of those three, and that ain’t good. 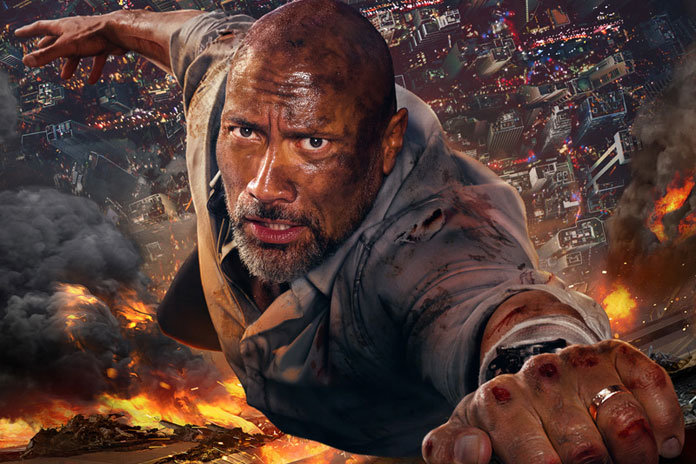 My wife says if I can’t get through this without mentioning Die Hard, I owe her ten bucks.

So how much will The Towering Inferno cost me?

Get over it, right? Those are decades old.

Fair enough. Ideas are born to be borrowed, and the real question is how well Skyscraper assembles its inspirations. The answers come without apology, cranked up to full tilt boogie until the rubble-strewn, crowd pleasing finale.

Of course Dwayne Johnson stars as Will Seymour, a former Marine and FBI hostage negotiator now working as a security expert. A tragedy on his former job cost Will his left lower leg, but it led him to a perfect new life with his surgeon wife Sarah (Neve Campbell) and their two cute kids.

Will’s hired to assess the security measures at The Pearl in Hong Kong, the world’s new tallest building that is ready to open its luxurious residential upper half. Will’s intimidated by such a large assignment for his small firm, but there’s a specific reason he got the call.

There’s something in The Pearl’s vault that is very valuable to international terrorist Kores Botha (Roland Moller), and Will is part of the plan to take it from the skyscraper’s visionary designer (Chin Han).

Who’s the fly in that high rise ointment? The monkey in the wrench? It’s The F. Rock

Writer/director Rawson Marshall Thurber (Dodgeball, We’re the Millers, Central Intelligence) trades comedy for disaster thrills with the tangible relish of a kid trading flashcards for the latest XNintendoBox 64 in 3D.

The heroics are grand in scale, engulfed in flames and often unveiled with gasp-inducing effects that consistently poke at our fear of heights. The pace is quick, Johnson serves up his usual good guy charisma and Campbell gets to be more than just a loving bystander.

And it all could only be more ridiculous if Will and Botha got in the Face/Off machine and switched identities.

The film’s plot turns and callbacks get so shameless it nearly pauses for applause, but the commitment is so unabashed and the spectacle so summer-ready, Skyscraper wins you over with pure “are you not entertained?” tenacity.