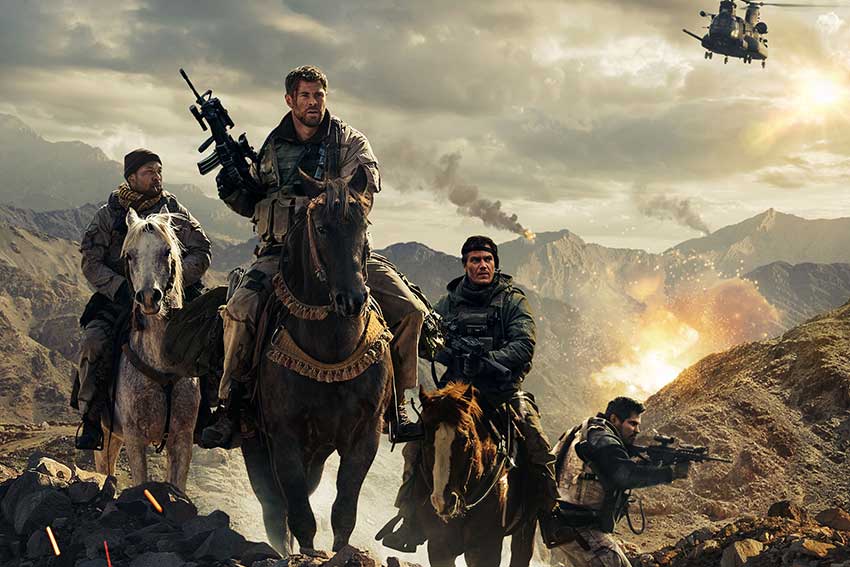 12 Strong tells a tale of extreme courage and heroism carried out by extremely courageous and heroic men. Like many films on a similar path, it sometimes struggles to navigate the overly familiar tropes that come with this territory.

In the weeks immediately after 9/11, the special forces team now known as the “Horse Soldiers” were the first deployed into Afghanistan. A dozen men, led by Captain Mitch Nelson (Chris Hemsworth, charismatic as usual), joined the soldiers under Afghan warlord General Dostum (Navid Negahban) in an attempt to take back a Taliban stronghold.

The men are tough, stoic, and bound by the brotherhood of battle. Their women and children back home must stiffen their lips and hold heads high while they long for their husbands and fathers to return. These traits are not weaknesses in the real world, far from it, but incorporating them into a big screen narrative without the essence of checking off obligatory character-building boxes has become a common obstacle that 12 Strong can’t overcome.

But almost every time you’re ready to give up on it, the film rebounds with a surprise. While there’s far too much exposition dialog, with the characters explaining things to the audience rather than talking realistically, there are also quiet moments that resonate. Dostum’s reminder to Nelson that he may already have a life “better than the afterlife” underscores the film’s success in showcasing the effective teamwork and diplomacy that emerged in the mission, despite the culture clash.

The ensemble supporting cast is loaded with strength (Michael Shannon, Michael Pena, William Fichtner, Moonlight‘s Trevante Rhodes), and Fuglsig finds his footing after a by-the-numbers start, rolling out some tense, gritty, and well-plotted battle scenes for a rousing finale.

The Horse Soldiers earned their statue at the 9/11 Memorial site, and 12 Strong is a well-deserved salute. It’s always watchable but also muddled, and too often chooses broad strokes over finer, more memorable points.