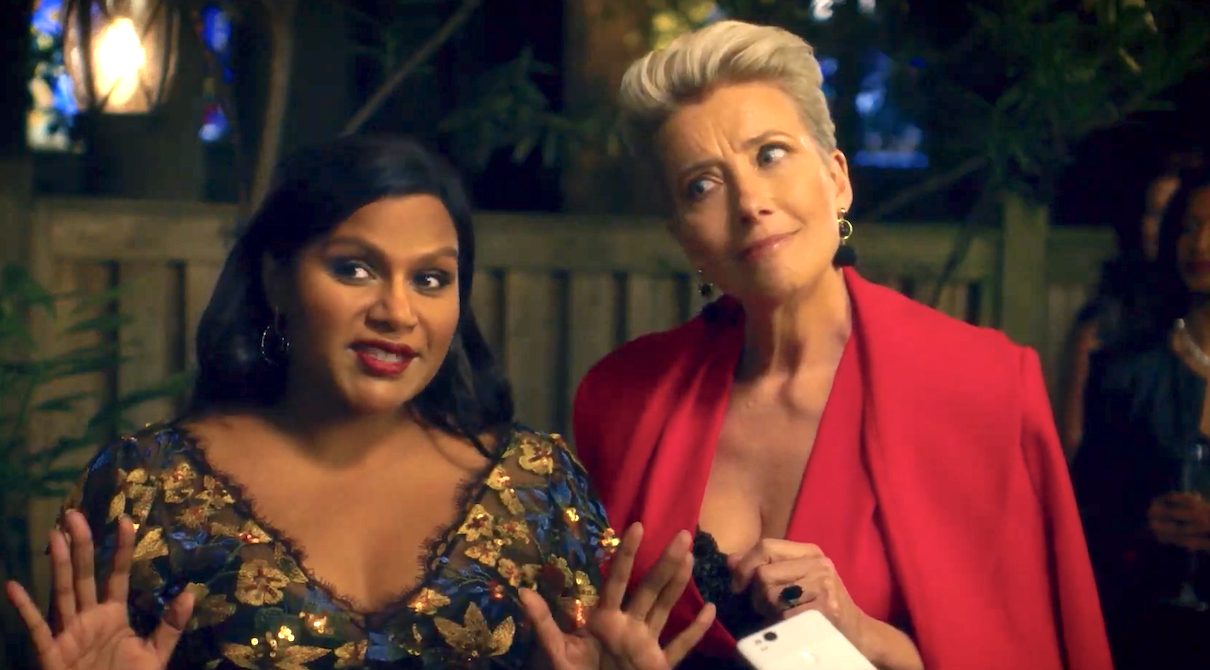 Late Night also offers plenty of insightful funny business, but trades the hard R-rating for a more agreeable sell, one that will hopefully translate into selling more tickets.

Mindy Kaling’s debut screenplay may be ultimately eager to please, but it’s also a sharp and solidly funny takedown of the challenge in navigating a social landscape in motion.

Kaling also stars as Molly, a factory worker who’s main outside interest is comedy. Though her only standup experience is cracking them up over the intercom at work, Molly lands an interview for a writing gig at her favorite late night talk show.

Her timing is perfect. Comic legend Katherine Newbury (a pitch-perfect, absolutely Oscar-worthy Emma Thompson) has ordered some diversity be added to her all male, all pale writing staff, so Molly gets the gig.

Katherine may have been the first woman to enter the late night wars, but her act has grown stale and complacent. Icon or no, Katherine faces an overthrow attempt from a network president (Amy Ryan) with eyes on an obnoxiously edgy comedian (Ike Barinholtz as Kaling’s barely-veiled swipe at Daniel Tosh) as new host.

Can Molly’s fresh comedic takes save her hero’s job?

Credit Kaling and director Nisha Ganatra for answering that question without sacrificing the bigger points at work.

From slut shaming and #metoo to diversity, office politics and the shifting sands of comedic relevance, Kaling’s script is brimming with writing-what-you-know confidence, even when it’s coasting on roads most traveled.

But still, in those most predictable moments, Thompson’s deliciously droll timing meshes irresistibly with Kaling’s wide-eyed enthusiasm. They both get able support from a uniformly solid ensemble, and the biggest question mark about Late Night becomes that R rating.

The convenient layups the film settles for in act 3 seem like an understandable trade-off for a greater chance at mainstream appeal. So why not trim a few of those F-bombs to get a PG-13?

Late Night deserves plenty of eyeballs. For F@#! sake, let’s hope it gets them.