One hundred films in, you might expect director Takashi Miike to start repeating himself.

He does, in a way, with this big screen adaptation of the manga Blade of the Immortal, the tale of a samurai cursed with immortality.

Though Miike sticks mostly to genre work (horror, samurai, yakuza), his style veers wildly from one project to the next. Still, a thematic thread can be found in a lot of his films that questions the relevance of societal conventions. Though this theme was explored with a far more subversive touch in his 2001 gem Ichi the Killer, Blade of the Immortal shares a lot in common.

Manji (Takuya Kimura) is an insider on the outs. A samurai who’s killed his masters, he’s already doomed as the film’s prologue unwinds in gorgeous black and white. As Manji butchers his way through dozens of reprobates looking for the bounty on his head, Miike invites us into the hyperbolically brutal world of his imagination.

But it’s here, on the ground bleeding out surrounded by carnage of his own making, that Manji is gifted with immortality—a gift he takes to quite begrudgingly. Forever an outsider wanting to get farther out, he eventually takes up with an orphan bent on revenge.

Rin (Hana Sugisaki) lost her parents to outlaw bladesman Anotsu (Sota Fukushi) and his gang. Anotsu is an outsider who longs to be accepted. He’s skilled and serene where Manji is brutish and disheveled. They are opposite sides of the same coin, and for Rin’s sake, they become mortal enemies.

It’s not such an unusual plot, honestly. Though screenwriter Tetsuya Oishi complicates things with one side plot about Anotsu’s quest for acceptance and another about a rogue band of bounty hunters, the film basically boils down to one guy taking remarkable injury as he dispatches others due to sworn vengeance.

For two and a half hours.

Miike populates the corpse-strewn landscape with intriguing characters. Sure, they mainly exist to be dispatched by Manji, but each brings enough fresh personality and style to keep battle fatigue from setting in.

As is the case with his best efforts, Miike’s flair for fight staging, action choreography and bloodspatter—all of it in abundance—is on display. The result is a gorgeous, bloody mess that treads familiar ground but never wears out its welcome. 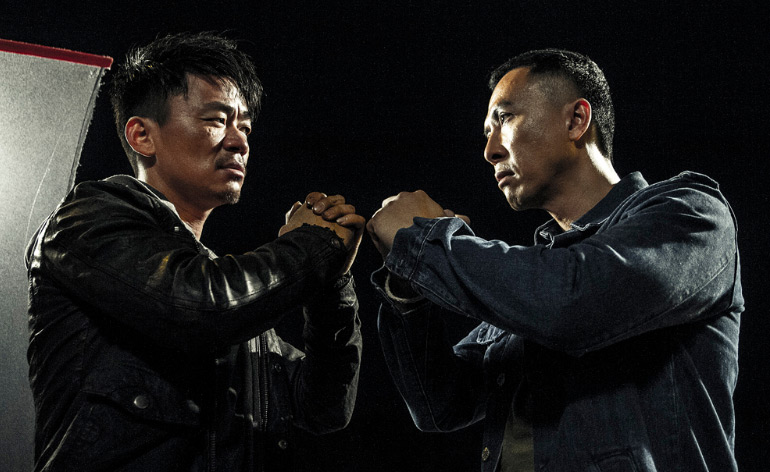 Do you love Hong Kong action movies? Director Teddy Chan does. To prove it, he’s created a love letter to the genre with his latest film KUNG FU KILLER.

Someone is murdering martial arts masters, beating each with his own specialty. Does the noble (yet righteously imprisoned) master Hanhou Mo (Donnie Yen) hold the key to finding the culprit before he kills again? And even if he does, can he be trusted?

The film’s a pretty traditional police procedural – spring Hanhou Mo from prison and he’ll help you catch your killer – but really it’s an excuse for hand to hand combat, then blade to blade combat, sometimes on rooftop, sometimes in boats, sometimes on giant skeletons of some kind, sometimes in traffic…

To enjoy this film you will have to open yourself up to it. It helps if you can also overlook the poor police work…and the acting…and the writing. But let’s be honest, that’s hardly the point of this exercise. One guy is killing masters in each discrete martial arts skill – weapons, boxing, grappling, etc. – and working his way toward the one man who has mastered them all, Hanhou Mo.

Is it true what evil Fung Yu-Sau (Baoqiang Wang) says, that martial arts is meant to kill? Can Hanhou Mo do as his beloved asks and restrain his fists? Oh Hanhou Mo, why must you be so damn noble?!

Chan celebrates his genre, peppering scenes with loving odes and fun cameos. Yen – veteran of every facet of martial arts and Hong Kong filmmaking – may not be much of an actor, but he’s fun to watch in this mash note of a movie. His Hanhou Mo is as elegant and restrained as Wang’s Fung Yu-Sau is disheveled and explosive, making them an intriguing set of oppositions in battle.

Chen’s camera is the real star, though, capturing the flashing swords and flailing limbs like surgical instruments or ballet moves. He throws in enough retro reaction shots to overjoy longtime fans – clearly the audience for the film – but finds his own visual flair.

KUNG FU KILLER is not a great movie. But it knows what it is, and with one goal in mind it delivers the goods.