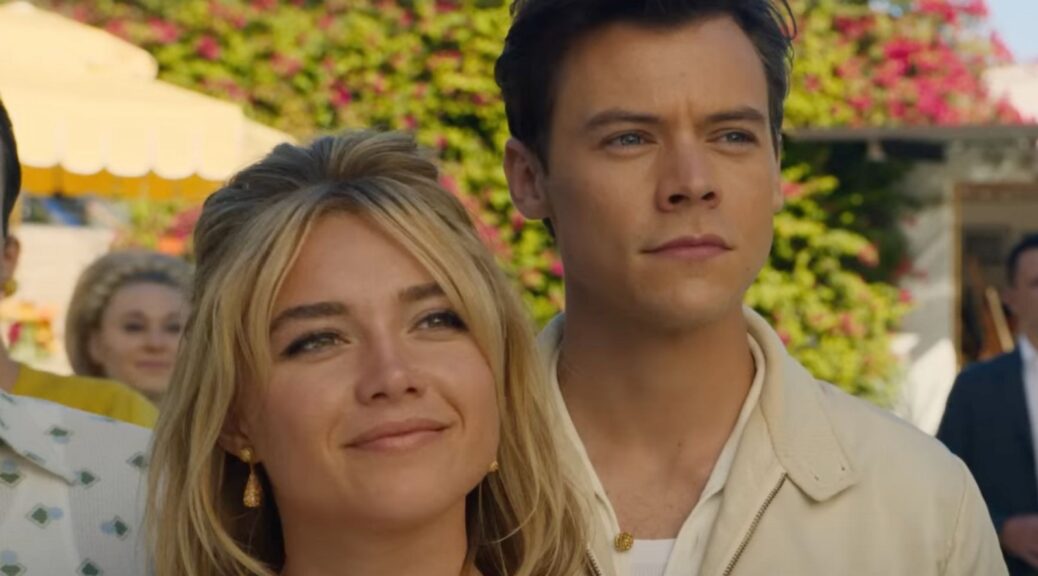 There’s drama, scandal, ghosting, possible spitting – Don’t Worry Darling is known for it all. And none of it’s even in the movie!

So, if you separate Olivia Wilde’s sophomore effort behind the camera from its pre-launch baggage, what do you have? An absolutely gorgeous if somewhat superficial critique of how little progress women – especially married women ­­– have made in terms of agency and control.

Its main recommendation is Florence Pugh, which should surprise no one. Her performances are always fiercely intimate and human; Alice is no different. Lovely wife of Jack Chambers (Harry Styles), Alice cocktails with the ladies, hums while she cleans, prepares a mean roast, and enjoys a healthy sex life with her devoted Jack.

Jack, that’s a manly name. You know what else is? Frank. And manly Frank (Chris Pine) is the force behind the town of Victory. He’s the visionary, the gatekeeper, the Great and Powerful Oz – and Pine relishes every scene-chewing moment on the screen. He is particularly effective when sparring with and menacing Pugh. Their spark is so strong it only makes the rest of the cast appear dimmer.

But we know something is amiss in Victory because nothing screams “something is amiss” to viewers as quickly as a colorfully wholesome late 50s vibe. But man, does Wilde and her production designer Katie Bryon nail that vibe. It’s like Mad Men meets Better Homes and Gardens with cool cars and fabulous costumes to boot, all of it choreographed to flow like the synchronized dance numbers forever punctuating the narrative.

What Wilde shows us is slick, stylish and well-constructed. What she’s telling us is fine, too, it’s just that none of it is as profound as Wilde and screenwriters Katie Silberman, Carey Van Dyke and Shane Van Dyke seem to think it is.

They make salient points about testosterone-laden rabbit holes and the inequalities that many demand of a “great” America, but their hand is rarely subtle. And when it comes, even the Twilight Zone moment lands with more shaky logic than well-earned resonance.

But Don’t Worry Darling isn’t worthy of gossip column dismissal, either. There is talent spread throughout the community here, just nothing in the collective effort that’s truly memorable. And like those hot new developments built on remnants of old ones, the film ultimately feels like a shiny new makeover of familiar ideas.