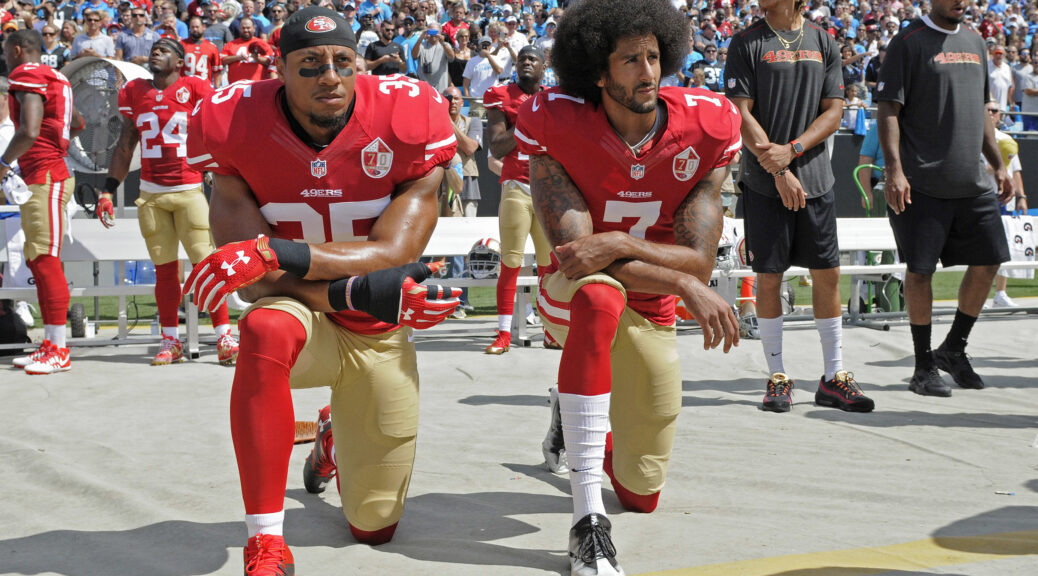 I’ve been a fan of the San Francisco 49ers for about fifty years, so I had a Colin Kaepernick jersey long before he started taking a knee during the national anthem.

And when I continued to proudly wear that jersey, I quickly learned how effectively Kaepernick’s peaceful protest had been twisted into hateful knots of white grievance.

In Kaepernick & America, directors Ross Hockrow and Tommy Walker revisit the protest’s timeline with insight and proficiency. But the subtle power of their documentary comes from its patience in deconstructing how Kaepernick’s true motives were distorted to fuel a racist narrative and a divisive election year.

And for those who don’t know Kaepernick’s personal history, Hockrow and Walker wisely begin with his upbringing as a trans-racial adoptee, and then follow his journey to NFL stardom, to falling one play short of winning Super Bowl forty-seven, to essentially being kicked out of the league.

It’s then that the film gives Kaepernick’s worldview a more distinct social and political context through archival footage and interview commentary (including CNN’s Don Lemon, an executive producer on the film).

With the birth of the Black Lives Matter movement after the 2014 death of Michael Brown, Kaepernick sought to speak out against police brutality in America. His silent act of social disobedience eventually made news, and activist DeRay McKesson becomes instrumental to the film’s success at revealing the historical nature of the resulting uproar.

Opposing views are supplied by anti-Kaepernick protesters and political candidates of the time, effectively rebutted by former U.S. Green Beret and NFL player Nate Boyer. Though Kaepernick’s protest began as a sit-down, he switched to kneeling after Boyer’s advice on a more respectful action. As we revisit the accusations and troop-shaming that were aimed at Kaepernick, Boyer’s recollections are a vivid reminder about just who was interested in thoughtful dialog amid conflict.

More concerned with correcting the record than breaking new ground, Kaepernick & America seems graceful and unassuming when placed against the vitriol spurred by the taking of a knee. But the film reminds us that protest is “the work of hope,” and ultimately looks toward a future of redemption for Kaepernick, and healing for a nation.